RICHMOND, Va. – Starting on Saturday, 56 of the best players from ECNL clubs in Maryland and Virginia descended on central Virginia for the chance to be evaluated and tested against their peers. 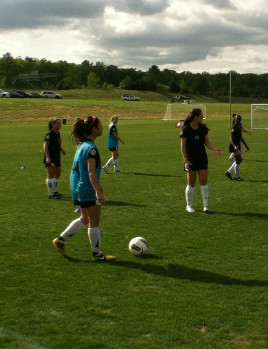 The region’s Player Development Program kept players busy all day Saturday, with a morning training session to begin the weekend followed up by a presentation by Virginia women’s soccer head coach Steve Swanson. The U20 World Cup-winning coach shared his insights on what it takes to make it and succeed on the next level.

The day wrapped up with a pair of scrimmages, as the players were broken up into four teams to give them the opportunity to showcase their skills.

An entertaining and back-and-forth encounter saw both squads come together and mesh as the day progressed.

With both teams featuring top talent – Andi Sullivan, a veteran of the U17 Women’s World Cup, bossing the game from her center back spot, and Casey Martinez one of many standouts on the other side – goals were relatively easy to come by in the first half.

Forward Meghan Flynn opened the scoring thanks to some persistent play, pouncing on a cross that was spilled into her path by the Team Two ‘keeper, firing home to make it 1-0.

Local talent Sydney Arnold tied it up, thanks prodding home the tying goal after some positive interchange down the left flank. Flynn struck again to put Team One back out in front, once again following up a play to add her second goal of the day.

The two teams were tied once thanks to Martinez’s finish from the right flank before the break. After each side had a chance to decompress and regroup at the half, play continued to steadily improve as players began to develop more familiarity with each other.

Penn State-bound forward Elizabeth Ball, who had looked dangerous in stretches throughout the day, found the back of the net with a nice long-range finish that goalkeeper Cassidy Babin got a hand on but couldn’t keep out of the net.

McLean Youth Soccer forward Mia Hoen-Beck has been called into recent U17 Women’s National Team, and the attacker showed her talent all day in helping lead her Team Three squad to a two-goal victory.

Leading the line up front, Hoen-Beck was both vocal in encouraging her new teammates, and back it up pressuring the opposition when the team didn’t have the ball, and looking to make things happen when in possession.

She teed up Maura Aman on a fast break with goalkeeper Ryan Jones off her line, but Aman hit side netting. A few minutes later, Hoen-Beck’s pressure paid off and she opened the scoring on a one-v-one with Aman.

Team Four settled into the game and started to pressure their opponents, with Kristina Diana dominating the right flank and aiming to make things happen in the box. She even hit a bomb from distance that rattled the crossbar.

Despite the efforts of Diana, along with Clarissa Kirch Downs, Team Three added a second goal when Alizah Johns-Boehme knocked home a rebound of a ferocious Aman volley to finish up the scoring.

After the break, Team Four seized more of the initiative, with Kaitlynn Klamut and Ann-Robert Goode among those leading the charge, though they were unable to find the back of the net.