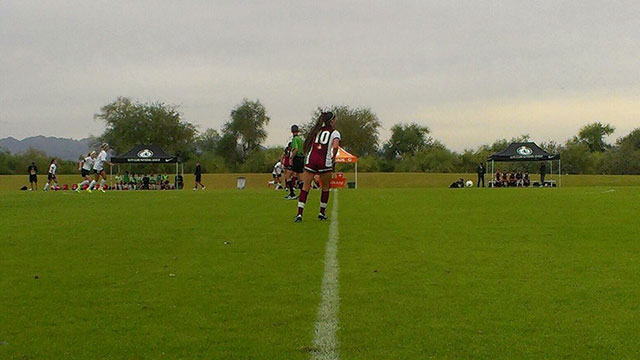 PHOENIX – It was a mostly cloudy first day for the ECNL showcase at Reach 11 Sports Complex, but there was bright play throughout the day. Here are a few notable matchups.

No. 6 Colorado controlled the run of play for most of the match, but fell victim to a counter attack early in the second half and was unable to secure an equalizer against the No. 20 Slammers.

The Slammers grabbed the lead just minutes into the second half when forward Haley Elizabeth Hopkins found space behind the Colorado defense following high pressure on the other end and slotted past the keeper to the near post for the game winner.

Chances were few and far between in the matchup between the two highly-rated teams, which played one of the most physical games of the afternoon.

The top-ranked Blues were able to open up their weekend with a victory over No. 3 Colorado thanks to goals from twin sisters Penelope Hocking and Iliana Hocking.

Penelope Hocking started the scoring moments after the opening whistle, stealing a back pass for the goalie and poking the ball home for the early lead.

Play opened up after the Hocking goal with both sides creating quality scoring chances, none closer than Colorado’s immediate response from outside the box that ricocheted off the crossbar.

U.S. U-17 Women’s National Team and Blues keeper Lauren Brzykcy had an impressive match and kept Colorado off the board late in the first half with a point-blank save.

Iliana Hocking put the match out of reach midway through the second half, stroking a shot past Colorado keeper Lily Rawnsley to ensure the Blues’ victory.

The No. 14 Slammers broke a 1-1 deadlock late in the second half to knock off No.9 Dallas in the club’s first match of the weekend.

The Slammers grabbed the lead 20 minutes in after Dallas keeper Justice Stanford misjudged a bouncing ball towards the net, resulting in an easy tap-in for Duke commit Lexington Magliarditi.

Dallas’ luck changed after the break when a Slammers’ goal-line clearance deflected off keeper and Penn State commit Amanda Dennis’ back and into the net to even the score.

The score remained the same until Stanford was beaten by a Stanford commit with 15 minutes to play.

Carly Malatskey found open space off a corner kick and blasted a header off the post and in for the game-winning goal.

Malatskey almost doubled the lead a couple minutes later but her volley sizzled off the crossbar and over the net.