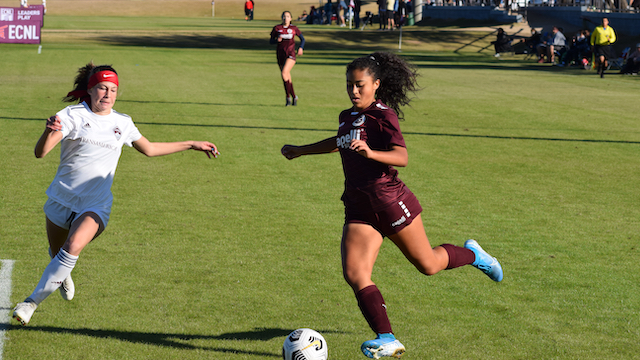 PHOENIX, Arizona - The first ECNL National Event of the 2020/2021 club season wrapped up on Sunday from Reach 11 Sports Complex. The finale from the showcase felt the most authentic day of play from the three. There was emergence, competitiveness, and teams grinding out results. Even with the unusual circumstances this year has brought to the world, the conclusion from ECNL Arizona looked like the final day of another showcase from the last decade at the top club league in girls soccer.

There were plenty of standouts from the action, but FC Dallas’ U17 side had arguably the most impressive display on the day. The collectively team effort helped them claim a victory against a very good Michigan Hawks side. FC Dallas’ second goal in the latter half was something club soccer coaches dream that any of their teams could pull off in a competitive game. Alexis Lee and Taylor Zdrojewski were the stars of the play. Lee received a pass in the right channel with a defender on her hip. She cut back to her left foot, which Zdrojewski used as the key to make her run off the shoulder of the defender. Lee delivered a perfect cross with her left foot.  Zdrojewski’s finish was fitting for the quality of the service. She headed the ball into the lower corner with ferocity. It was an unstoppable effort.

Hawks were great on the day, but FC Dallas proved that it is going to take something special to knock off this side in the postseason.

The FC Dallas clash against Michigan Hawks was just one of the games that TopDrawerSoccer caught on Sunday. Check out the standouts from that game and others below.