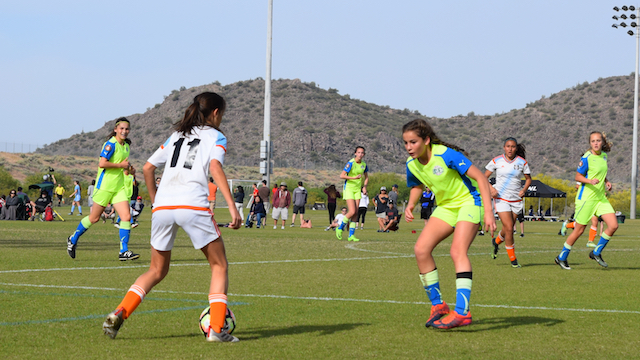 PHOENIX, Arizona - The National Event in Arizona is in the books. After closing the book on Sunday’s results from the Reach 11 Complex, there is only one showcase left on the schedule before the playoffs in June.

The National Event in Arizona was a change from the past, as ECNL had typically played the fourth national event of the season in Southern California. The venue served as a great host as teams and college coaches from across the country descended on Arizona for the three-day event.

Sunday’s action, as is usually the case at these events, featured some tired legs and sunburnt faces after a long weekend in the sun. The quality of the games took a slight dip with the end of the event in sight, but there were still some bright spots.

So Cal Blues versus De Anza Force in the U14 age group was one of the best games of the weekend. Blues came away with the win, but De Anza Force was the more impressive side of the game. The Northern California group challenged Blues by keeping possession of the ball for long spells. It took so late challenges and good saves to keep De Anza Force from scoring. The two teams show the potential for the elite girls club soccer teams, but the rarity of the quality of the game was a bit of a disappointment.

Check out which players stood out from the Sunday’s games below.