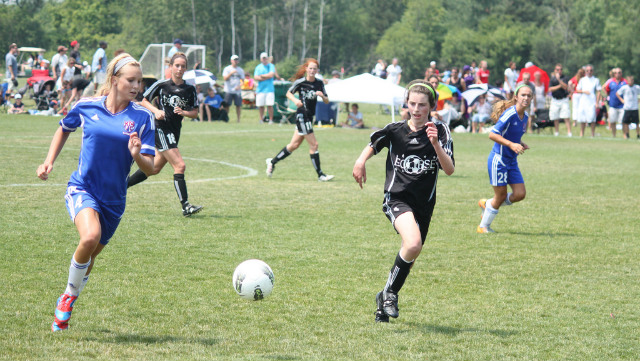 The ECNL is smack in the middle of the slowest stretch of its season, with only a small handful of clubs playing at all in the month of January.

Action will pick up pace in February, with a Showcase on the schedule as well as other teams heading back into play. All games and teams will have their eye on the standings, however, as the race for a playoff spot leads off.

To give a quick rundown, the ECNL adopted a new playoff format for the 2012-13 season. With the teams split into eight conferences, the top three teams from each division qualify for the national playoffs (scheduled for June in Aurora, Colorado). The field there for each of the U15-18 age groups will be 32, with the remaining eight teams qualifying via the wild card, which is measured by the most points per game overall. 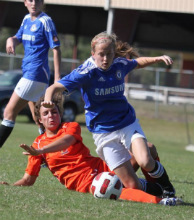 With that in mind, here’s a look at how the race breaks down with clubs at various points of the season:

As it stands, five of the playoff teams would emerge from the Midatlantic Conference, with Internationals SC, Freestate Soccer Alliance, Ohio Elite, Ohio Premier and McLean Youth Soccer all currently in position for the postseason. It’s still very early in the season for the clubs in that conference.

A few familiar names look poised to hang on to playoff spots, as Michigan Hawks have been dominant this season. Not too far behind the storied club are Sporting Blue and Eclipse SC. Two other teams, Vardar SC and Sockers FC, are a bit far behind the trio above them in the standings, but currently sit in wild card position.

The undefeated SC Del Sol haven’t lost in eight games, and, provided that they maintain that pace, should have little trouble making the playoffs from the Mountain West. Utah Avalanche, Heat FC and Sereno SC are also among those contending for a spot.

Lonestar SC has a 12-point lead over the rest of the teams in the Texas Conference, a spot in the playoffs all but assured. Dallas Sting, D’Feeters, Dallas Texans and Challenge SC are all jockeying for positions to qualify for playoffs via the Wild Card.

Eclipse Select currently leads the Midwest Conference, both via total points and points per games, and can only hope that the Michigan Hawks can’t track them down at the top. Sporting Blue Valley looks safe in third place, although no teams currently sit in a wild card spot.

Another quality team out in front of its peers is the Colorado Rush, which is ahead of the Utah Avalanche and SC Del Sol in the Mountain West. Other teams will need to make up ground in order to come away with a postseason spot.

The ECNL season is young up in the Pacific Northwest, but Crossfire Premier jumped out to an early lead with four wins from its first four games. Not too far behind are Mustang SC and Washington Premier, although there is plenty of time left in the season.

It’s very close near the top for the top spot in the Southeast Conference, but all three teams – CASL Chelsea, Carolina Elite Soccer Academy and Concorde Fire – look set for a playoff opportunity when all is said and done.