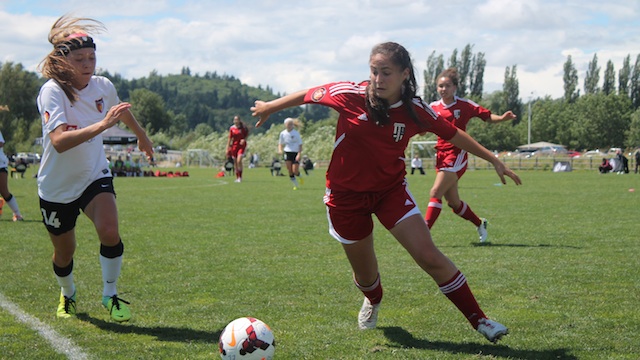 REDMOND, Washington — The sprawling Sixty Acres Park was the sole purview of U15, U16 and U17 ECNL teams on Friday. With the eight remaining U14 and U18 sides taking a break before semifinal play begins Saturday, the day offered the first opportunity for the middle three age brackets to cinch up spots at next month’s national finals.

Nobody did it more quickly and with more dramatic flair than Dallas Texans U16.

The Texans became the first team in Seattle to lock up a Champions League spot in Richmond, Virginia next month, and they did it with seconds to spare. They scored a goal in the first minute of stoppage time to secure a heart-pounding 2-1 victory over FC Bucks to win Group E with a game still left to play. The Texans wrap up the playoffs with Real So Cal on Sunday, but RSC’s wild 3-3 draw with NC Fusion means the Texans don’t need a result. They’ll coast into Richmond regardless.

“Obviously from an emotional standpoint, it’s wonderful,” Texans coach Sean Bubb said. “It’s great for the kids, great for the club. It wasn’t pretty because of the conditions, but FC Bucks are a very good team.”

About 10 minutes before the game started, a wicked wind kicked up and swept over the length of the field. The Texans had the wind in the first half and made immediate use with a goal that Grace Cory bundled into the net off a Bayleigh Chaviers cross just five minutes into the game. But FC Bucks held out for the rest of the half, giving them a prime chance to retaliate with the wind over the final 45.

It almost looked as though they’d waste it. The game was a slog with the wind either cutting down or sailing long balls, and it progressed into the final five minutes with the Texans still clinging to their advantage. Finally, FC Bucks found the breakthrough four minutes from time when Bridget Galen connected on a volley to tie the game. That not only seemed to rob the Texans of their group title, but it would’ve also launched the Bucks back into the discussion.

It wasn’t to be. A minute into stoppage time, Haley Berg wriggled loose in the box, cut once onto her left and twisted a shot into the bottom right corner for an improbable winner and a spot in Richmond. It was very nearly the last kick of the game.

“Everybody’s come here to compete and go to the next round,” Bubb said. “It’s nice to be able to do it with a game to spare.”

Both of these teams won their group openers, meaning a win would’ve given either a hammerlock on the race to a spot in Richmond. Eclipse was just moments away from doing just that, but a late winner will force this group into a nervy final day of action on Sunday.

Eclipse opened the game on a flyer with a goal about five minutes into the game off a frantic scramble inside the six. Eagles redoubled its efforts, though, and largely controlled play - with the aid of the wind - over the rest of the half. The payoff came in the form of a well-taken Kiara Pickett goal about 15 minutes from the half. That seemed to be a just equalizer, but the good vibes didn’t last long.

Not five minutes later, Eagles struck back. Janeece Ader had just been felled with a lower-body knock when she got up and almost immediately hit a golazo from 25 yards. Eagles took that lead into the later stages of the game and, with just a minute left, it looked as though they’d take all three points and firm command of the group. But a massive goal from Eclipse’s Jenna Lundgren equalized terms at the death, and now the spot is up for grabs. Eagles, Eclipse and Texas Rush each enter the final day with a shot at advancing.

The Hawks needed this one. A loss in their opener against the San Diego Surf doomed the incredible talented Hawks to a game of catchup to progress through the group. A late lapse assured they wouldn’t have any luck in that category. Meanwhile, Washington Premier’s furious late-game comeback launched them right back in the hunt for Richmond.

The Hawks got out to a 2-0 lead just after the start of the second half despite operating largely on the counter, but Washington Premier mounted a furious comeback that saved their week. With about 15 minutes left to play, Kelcie Hedge redirected in a cross from Jessica Udovich to halve the lead, and that marked a severe turning point the game. Over the next 10 minutes Washington Premier poured it on thick.

The crucial goal came just five minutes after Hedge’s. Nearly from her back, Elizabeth Griffith scythed in a goal to knot the game at 2-2, which is where it stayed. The point was immense. Washington Premier plays group leaders San Diego Surf on Sunday, and it set up a clear-as-day scenario. Win and you’re through to Richmond. Lose or draw and stay home.

Buoyed by the commitment of goalkeeper Phallon Tullis-Joyce, Match Fit Academy nabbed a second straight shutout, continuing its hot start to the Seattle stint. It marked the second straight shutout for Tullis-Joyce, who is flying back across the country to New York on Saturday for her graduation, and plans to be back in Seattle in time for Sunday's decisive game for the New Jersey club.