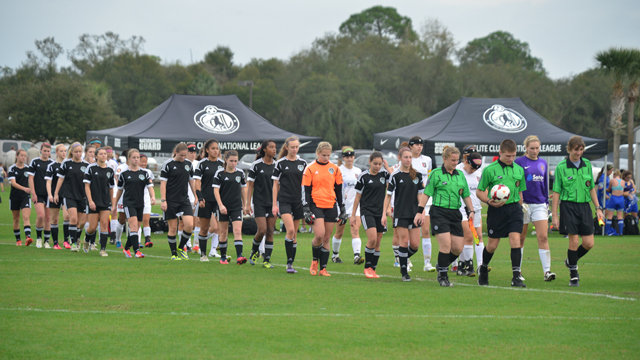 ECNL play picks up steam this weekend with the first event of 2015 in Texas. One hundred and thirty teams are headed to Lone Star state to play in front of college coaches and national team scouts. There will be some stiff competitive at the showcase at Rolling Hills this week. Here is a small sample of the games and players to watch.

The marquee game of the opening day is Crossfire Premier against Concorde Fire. Crossfire is 4-0 on the season and hardly broken a sweat yet on the campaign. Concorde sits in sixth place in the playoff standings after a 13-2-2 start to the season. Concorde hasn’t had an ECNL game since December though so rust could be a factor on Friday.

Solar Chelsea Soccer Club takes on Ohio Premier on Friday in another quality matchup from opening day. The Texas squad has been one of the most dominant in the ECNL this season with 0 losses and only six goals conceded through 17 games. Ohio Premier is in the infancy of its season with only four games played.

Rounding out Friday’s top games from the U15 age group is the matchup between Real Colorado and Dallas Texans. Real Colorado is facing one of the host sides, but this is the first game for Colorado since December. The visitors will be counting on U.S. U17 Women’s National Team forward Sophia Smith against the strong Dallas Texans defense. Smith has 12 goals in 13 appearances this season.

Eagles Soccer Club is one of the few teams from Southern California heading to Texas for the showcase, which could make for a difficult trip for the team from Camarillo. Southern California is in the midst of high school playoffs, which could leave some of the Eagles players unavailable for the trip. U.S. U17 WNT standout Kiara Pickett was bounced from CIF on Tuesday, so she should be making the trip. Pickett is a dynamic talent with a bright future. Eagles take on Indiana Fire Juniors, CASL, and Washington Premier while in Texas.

TSC Hurricane faces a tough test on Saturday against Colorado Rush. Hurricane sits in second place in the Texas Conference with a 9-2-2 record. Colorado Rush is 7-3-1 on the season and averaging nearly two goals per game.

SLSG-MO will face some difficult challenges in Texas with a trio of tough games especially the Saturday fixture against Bethesda SC. SLSG-MO is playing its final three games of the regular season and trying to close the book on the campaign on a high note. The Missouri squad is 8-4-3 on the year. Bethesda SC is just getting started with a 3-0-1 record. Cameron Murtha leads the way for the Maryland squad with three goals and three assists.

Real Colorado faces some difficult challenges in Texas with games against FC Virginia, Dallas Sting, and Vardar. The leaders of the Colorado Division also will be without star Mallory Pugh who is off to Spain to play with the U.S. U20 WNT at La Manga.

Solar Chelsea Soccer Club against McLean Youth Soccer on Saturday is one of the top games from the weekend in Texas. Both teams are battling for spots in the playoffs and could benefit from a good showing at Rolling Hills. Solar did not fare well in the last event with a 0-1-2 record in Florida.

There are only 12 teams from the U18 age group playing this weekend. The few fixtures do provide some enticing matchups though. Dallas Texans against FC Bucks on Saturday could be one to watch. Former U.S. U17 standout Madison Haley is leading the charge for the Texans this season with 14 goals in 12 appearances.