This age group has one main focus in the coming weekend: the U14 Event in Greer, South Carolina. Several top teams from the Eastern Corridor will be in attendance, with every team looking to impress. Those scheduled to be in attendance include PDA, CASL Chelsea Ladies, Atlanta Fire, Richmond Strikers, FC Bucks, Charlotte Soccer Academy, FC Stars of Massachusetts and McLean Youth Soccer to name a small handful. Teams will be in action on both Saturday and Sunday. 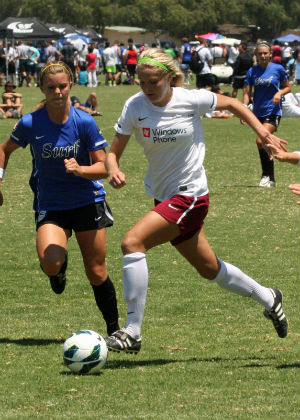 While most of the action at this age group will be focused on South Carolina, a small cluster of other teams are set to play as well. Solar Chelsea and FC Dallas represent one of the bigger games, with both representing well-established club programs in the Dallas Metroplex.

In California, West Coast FC will take on Slammers FC, while Eagles Soccer Club and So Cal Blues will also duke it out.

There are plenty of good clubs in the Northeast Conference, and at this point in the season FC Bucks holds a slight edge at the top of the standings, thanks in part to a well-balanced offense led by Emma Loving, Sydney Jones and Bidget Galen. A game against sixth place East Meadow SC and Albertson Fury is the next test and a chance to hold on to the top spot.

The San Diego Surf continues to impress, maintaining its unbeaten mark in the SoCal Conference thus far. The club will go for its tenth overall win in the conference against Strikers FC on Saturday. Midfielder Olivia Erlbeck and Dana Dalton continue to be influential on the team’s attack.

Heading back into action this weekend is another team without a loss in its conference – the Dallas Sting. A matchup with the Dallas Texans is on the docket, the Sting’s first game since April 7. Double-digit goal scorer Lakyn Pope guides the offense, supplemented by players like Olivia Bagby, Jordan Harr and Cyera Hintzen.

A stingy defense – only six goals allowed in Midatlantic Conference action – has helped Ohio Elite Soccer Academy grab a hold of first place in the conference. A tough test awaits this weekend with a matchup of the Ohio ECNL clubs, as they’ll take on both Ohio Premier Eagles and Internationals SC.

The strong group of players MVLA has at this age group continues to enjoy success in its first season in the ECNL, holding first place in the Northwest Conference by a six-point margin. A game on Saturday against De Anza Force is the next chance to try and extend that lead, with second place Washington Premier getting a weekend off.

Maintaining its first place position has to be one of the priorities for Freestate Soccer Alliance ahead of its Maryland matchup with Bethesda SC. With just one loss in 12 games, FSA will look to maintain its advantage over the trio of chasing Ohio clubs, which each play a pair of games over the weekend. Forward Sheridan Street has been a key figure for Freestate so far, with eight tallies in 15 games in the league.

With two games left on the season, Lonestar SC has only tasted defeat this season in non-conference games. Boasting a 13-0-3 mark in the Texas Conference, that record goes on the line against D’Feeters SC on Saturday. The play of Mikaela Harvey, Chelsea Jackson and Katie Turner has helped yield those results.

FC Stars of Massachusetts, currently nine points behind conference leaders PDA, get two chances at cutting into that lead this weekend, with games against SoccerPlus Connecticut and Connecticut FC.

Heading into action for the first time since March 3, TSC Hurricane begin the final four-game stretch of its ECNL slate with a game against Challenge SC on Sunday. The offensive trio of Anna Beffer, Elizabeth Keester and Kristen Killion has been extremely influential for the Oklahoma side this year, and will look to lead a strong finish starting with this game.

Ohio Premier Eagles face a dual slate of games against tricky opponents, taking on Carmel United and Ohio Elite Soccer Academy. Currently in first place with the highest points per game total in the Midatlantic, they still need to catch up with FC Virginia’s point total – with the Virginia club in action against the Virginia Rush on Sunday.