ECNL Preview: Calm before the storm 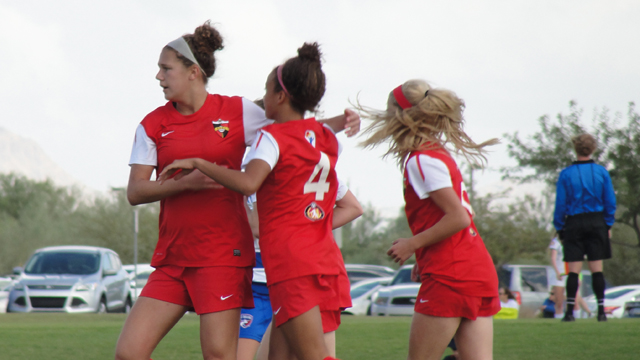 One week to go until the ECNL heads to sunny San Diego for its fourth national event of the 2013-2014 season. Unsurprisingly, this weekend features a lighter slate of games in anticipation of the three-day experience.

Check out a few of the highlighted matchups below in this week’s ECNL preview.

There’s an event in Wisconsin this weekend with Sockers FC, Colorado Storm, Real Colorado, Michigan Hawks, Minnesota Thunder Academy, Colorado Rush, Eclipse Select Soccer Club, SLSG, SLSG-Metro, Vardar, Sporting Blue Valley, and FC Wisconsin Eclipse all in attendance. With three games in two days on the schedule, it will be the team with the best depth that comes out of the event with the most to show for it.

Sockers are the only undefeated team of the bunch with a 6-0-1 record in conference play. Sockers open up play on Saturday against Colorado Storm, which has the top offense in the Heartland Division. Emily Sloan and Abby Kassal are tied for leading scoring honors with five goals each.

The game of the weekend is a local rivalry though, as So Cal Blues SC hosts West Coast FC on Saturday. Blues sit in the top spot in the Southwest Conference in the national standings. WCFC is in second in the conference and 10th in the national standings. So Cal Blues won the first meeting this season 2-0, which is WCFC only conference loss on the campaign.

In the Northeast Conference, PDA and Connecticut FC battled on Saturday at the PDA Soccer Complex. Both teams are slowly waking from the slumber of winter and are looking to start April with a bang. PDA is 7-0 on the season overall and has only let in three goals.

After rolling through December with five straight wins, Penn Fusion hit a speed bump in March and only collected seven points from four games. Fusion returns to work this weekend with games against East Meadow Soccer Club and Albertson Fury.

The battle for the top spots in the Ohio Valley Division remains tight as nearly every team is still in the mix at this stage of the season. International SC leads the pack and faces Ohio Elite Soccer Academy and Carmel United this weekend. Ohio Elite’s Abby McNamara has been the top scorer in the division with 17 goals in 11 games this season.

FC Virginia closes out its regular season this weekend with home games against Maryland United FC and Bethesda SC. Virginia is 11-1-1 in divisional play with 42 goals for and 11 goals against. Emily Fox continues to lead the charge for the club with 18 goals to her name.

FC Stars of Massachusetts are in a battle to stay in the playoff contention as the club sits in the 32nd spot in the championship standings. Stars play Continental FC Delco and Match Fit Academy this weekend before heading to San Diego next week.

The West Coast FC – So Cal Blues battle in the U17 age group will be another one to watch. WCFC is in the top spot in the division in this age group thanks to Leah Pruitt’s 20 goals this season. The first meeting this season between the two ended in a wild 6-4 affair. Christina Settles and Pruitt both scored twice for WCFC. Kaitlyn Cook and Laura Buck each had a goal for the winners as well. Nikole Rosen scored twice for So Cal Blues along with tallies from Katie Pingel and Erika Okuma.

Ohio Elite is trying to hold off the competition in the Ohio Valley Division as it faces Internationals on Saturday in a battle of the first and second place teams in that division.