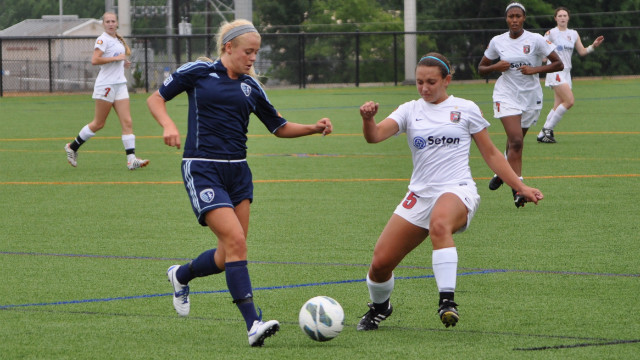 A holiday weekend is a chance to squeeze in one more additional game for a handful of clubs as the ECNL season continues. Waukegan, Ill. will host clubs like Sockers FC, Colorado Rush, Colorado Storm, St. Louis Scott Gallagher and heaps of other teams between the U15-U17 age groups.

That and more ahead of another hectic weekend in the ECNL.

After picking up two wins from its first three games of the season, Carmel United welcomes Ohio Elite Soccer Academy for just a single game this weekend. Cassidy Lindley, Lucy Lyon and Katherine Soderstrom have both enjoyed a solid start to life in the ECNL.

Four wins on the trot is certainly an ideal way to start any season, and that’s what the Pleasanton Rage has managed so far in its NorCal Division schedule. A test against De Anza Force lies ahead.

After picking up two wins against them on the road last weekend, CASL welcomes Richmond Strikers and Virginia Rush to North Carolina for two games. Christina McCartney, Taylor Cammarata and Jessica McCoppin have all been among the goals early on in the season.

Early on in the season, Concorde Fire finds itself in third place in the Southeast Conference. Heading into action after a weekend off, a trip to Florida is on the docket with games against VSI West Florida Flames and Orlando City looming.

Four wins on the trot to open the season has West Coast FC sitting pretty in October. They’ll face a tough and talented SoCal Blues side on Sunday. Madison Bennett and Lake Duerksen have shoulders the scoring load during the early success.

The Michigan Hawks will be amongst the fray up in Illinois. Difficult, non-conference games are on the schedule for the Michigan powerhouse, facing the Colorado Rush, Real Colorado and St. Louis Scott Gallagher.

Another squad that is hosting the Illinois weekend – or at least not too far from home – is Eclipse SC. They’ll be missing standout forward Zoe Redei, who was named to the U.S. U17 WNT roster for camp next week down in Florida. However, the team has plenty of weapons left, including Alissa Gorzak, as they take on Real Colorado, Scott Gallager Metro and Sporting Blue Valley.

Arizona clubs are making the trip further west, and Irving Strikers will host Sereno SC and SC Del Sol. While it may be early, these conference games are going to be of utmost importance for the Strikers as they try and climb the conference standings.

A perfect 6-0-0 record to start the season, the Colorado Rush are also making the trip to Illinois. Games against Michigan Hawks, FC Wisconsin Eclipse and Sockers FC are on the horizon. The first matchup against the Hawks in particular should be one of the top matchups of the weekend. Jordan DiBiasi is the team’s top scorer so far with five goals on the young season.

Penn State recruit Elizabeth Ball has started off her final ECNL season for the Richmond Strikers in ideal fashion, with three goals and three assists. She’ll head to North Carolina with her squad for tricky games against CASL and NC Fusion.

Sporting Blue Valley will also be in Waukegan, taking on Sockers FC and Eclipse Select, two very good opponents. Dorian Bailey’s absence continues after she made the U17 WNT roster for qualifying, but scoring goals has been no problem for Abigail Sieperda and Savannah Trujillo.