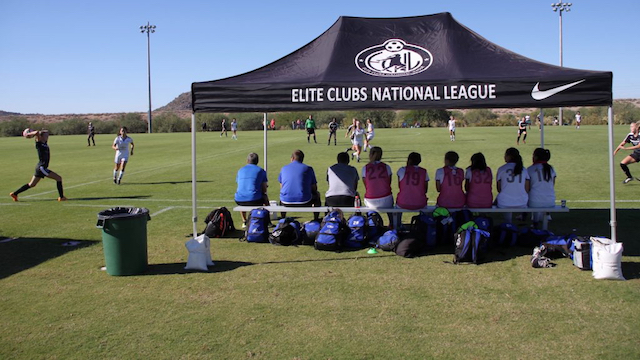 The fourth National Event of the 2016-2017 ECNL season kicks off on Friday from Phoenix, Arizona. Some of the top teams from all over the country will be in attendance as teams compete from improved spots in the standings with the ECNL National Playoffs only two months away.

TopDrawerSoccer will be on hand for the games at the Reach 11 Complex. Check back with TDS throughout the weekend for daily standouts and recaps.

The best day for the youngest age group is Saturday with a number of great games early on in the day. San Diego Surf takes on De Anza Force at 8 a.m. on Field No. 8, which figures to be one of the best games of the weekend. Surf is 8-1-4 on the season, but has been in a slump of late as they have not won an ECNL game in 2017. De Anza Force is 6-2-2 on the season, and rolling into the weekend after a 7-1 win over Santa Rosa United last week. De Anza Force faces the Southern California powerhouses while in Arizona with games against Slammers FC, Surf, and So Cal Blues on the schedule. PDA against Slammers and So Cal Blues versus Mustang SC are also scheduled for Saturday morning in the other two key contests of the day.

So Cal Blues is the team to beat in this age group. The Blues won the U14 National Championship last season and look even better during the 2016-2017 campaign. The big test for the Southern California side could be on Saturday when they square off against Crossfire Premier on Field No. 3 at 10 a.m. Heading into the weekend, Crossfire Premier has only conceded one goal through eight games. Goalkeeper Holland Pilukas and the Crossfire defense will be tested against the Blues on Saturday morning.

Strikers FC versus Seattle Reign, FC Stars of Massachusetts versus San Diego Surf, and Eagles Soccer Club versus Mustang SC are also shaping up to be great games in this age group on Saturday.

Friday might be the best day of the weekend for the U16 age group. The opening games in this group are shaping up to be some of the best all weekend. Slammers versus FC Stars of Massachusetts, Michigan Hawks versus Ohio Premier, Real So Cal versus Boston Breakers, and West Coast FC versus PDA all look to be enticing encounters from the first day of play at the Reach 11 Complex.

So Cal Blues, also the top team in this age group, faces their biggest challenge of the weekend on Sunday in a game against Penn Fusion, which currently sits in 13th in the Champions League standings. Blues are 16-0 on the season with only seven goals conceded. Goalkeepers Ryan Campbell and Megan Short have been terrific this season.

There are a number of teams in Phoenix this weekend that could make big moves in the Champions League standings in the U17 age group. Match Fit Academy is a prime example. The New Jersey club has only five games under their belt this season so a strong showing from Arizona could push the team into the upper echelon of the standings with only a couple of months left before the playoffs. Match Fit takes on Eagles Soccer Club, Heat FC, and Santa Rosa United at the Reach 11 Sports Complex.