ECNL Preview: Heaping the pressure on 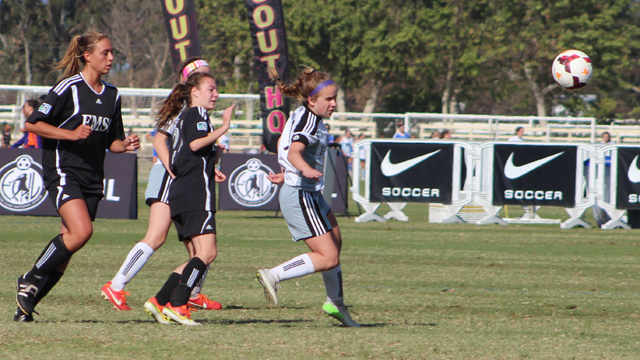 The end of the season pressure is starting to pick up steam in the ECNL as teams compete for those final playoff spots as well as the top spots in the division. This weekend features a number of meaningful games.

Santa Rosa United is trying to hold onto one of the final spots in the champions league qualification over the weekend with a game against MVLA. Securing three points will be the priority when Santa Rosa takes on the local rival on Saturday. Alyuah Shields and Gabriella Rodriguez were the key players in the first meeting this season. Shields and Rodriguez combined for three goals in a 3-1 for Santa Rosa.

Crossfire Premier closes out its regular season this weekend with a trip to Idaho. Crossfire takes on Utah Avalanche and FC Nova at Nova’s complex. The Seattle club will be looking for leading Venicia Juarez to cap an impressive debut season in the ECNL – 15 goals in 15 games – and help the team secure six points from the two games.

The game of the weekend from the youngest ECNL age group comes from Texas where Dallas Texans host Lonestar SC on Sunday. Texans (12-2-2) sit in first place in the Texas Conference and control their own destiny to the postseason. Lonestar (9-0-5) sits in second and needs to run the table to surpass the Dallas club. The visitors did win the first meeting this season 1-0. Oufolasade Adamolekun scored the lone goal and Tara Lujan logged the shutout in goal for Lonestar.

It’s a battle for the New England Division top spot on Saturday when FC Stars of Massachusetts host Connecticut FC. Stars (5-1-3) sit in the top spot with three weekends left in the regular season. Stars rolled in the first meeting this season between these clubs 4-1. Will the rematch offer a closer affair?

Penn Fusion SA is trying to bounce back into the win column this weekend with games against PDA and World Class FC. After winning 10 of its first 12 games, Penn Fusion has dropped the last two and sits in 11th in the champions league qualification standings. This weekend also offers a chance at revenge after PDA dealt Fusion its first loss of the season in March 2-0.

Arsenal FC’s quest for a wild card berth is one of the most interesting storylines heading into the final weeks of the season. The Southern California clubs is quite a bit off pace right now, but the possibility is there with five games left. Arsenal takes on Strikers FC and Eagles Soccer Club over the weekend. Arsenal beat Strikers 2-1 earlier this season with Sheridan Lanz and Raven Sweeney scoring the goals.

Internationals SC continue its quest for a postseason berth with games against Ohio Elite and Carmel United over the weekend. Internationals SC hold the final wild card spot heading into Saturday. Ohio Elite won the first meeting this season between the clubs 2-0, so a chance at revenge will also be on the mind for Internationals.

FC Bucks’ eight-game undefeated run is on the line this weekend when the Pennsylvania club hosts World Class FC and PDA. Bucks won the first meeting this season against World Class FC 3-2 thanks to two goals from Emma Loving. Sydney Jones scored the other goal.

Real So Cal hosts Eagles Soccer Club and Strikers FC in an important Southwest Conference showdown. Real So Cal sits in fifth place in the conference standings but has lost its last two games. Oregon commit Julia Pedati scored a hat trick in the first meeting between Real So Cal and Eagles to lead RSC to a 3-1 win.

There is a potential playoff preview brewing in SoCal this weekend when West Coast FC hosts Sereno Soccer Club. Both teams are in the top 11 in the national standings with West Coast FC holding the top spot overall. Christina Settles and Leah Pruitt each scored in the first meeting this season in a 2-0 West Coast FC win.

The game of the weekend from this age group comes from the Great Lakes Division where Eclipse Select Soccer Club is scheduled to play Michigan Hawks on Saturday and Sunday. Eclipse trails the Hawks in the national standings, but holds the slight lead in the division. The division crown could be decided in the two-game tilt.

Thanks to slip-ups from some other squads, Internationals SC is inching ever so close to clinching the top seed in the U18 age group for the playoffs. The Ohio club takes on Ohio Elite Soccer Academy and Carmel United over the weekend. Internationals will be without leading scorer Emily Ogle who was called into camp with the U.S. U18 Women’s National Team, which begins on May 11.