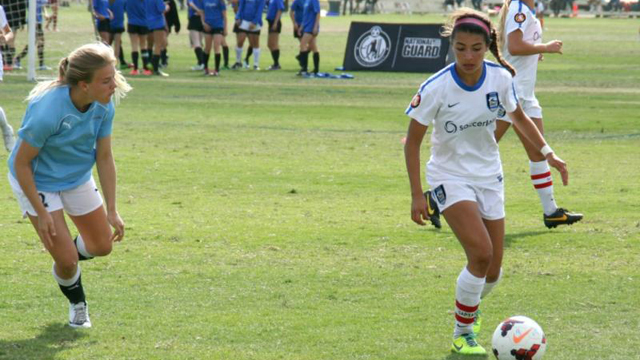 The ECNL is mostly hitting the bottom corners of the country this weekend with prominent games in the Southeast, Texas, and Southwest. Each age group features some games that could have major influence on the standings come Monday. Check out the previews of a select few games below.

Slammers take on San Diego Surf on Saturday in a fixture between the top two teams in the Southwest Conference. Both teams hold a 5-0-1 record at this stage of the season. Slammers have been more authoritative in front of the goal with 33 goals from those six games. Surf has been tough to break down with only two goals conceded this season.

Solar Chelsea Soccer Club puts its perfect record on the line on Sunday against Dallas Sting at Texas Women’s University. Solar is 7-0-0 on the season with 19 goals scored and 0 conceded. Sting sits in fourth in the division with a 5-2-1 record. Caroline Simpson leads the Sting attack with four goals and five assists to her name.

Charlotte Soccer Academy squares off against Southeast Conference foe GSA (Gwinnett Soccer Association) on Sunday. Charlotte sits in second place in the conference while GSA is in third. Hannah Guller leads the Charlotte offense with three goals and two assists this season.

Orlando City takes on Concorde Fire on Saturday in a fixture between the top two teams in the Southeast Conference. Concorde Fire sits in first place with a 6-1-1 record. Orlando City is in second 3-1 mark. Madison Sagas leads the Orlando attack with five goals this season.

Real So Cal faces Slammers on Sunday in a fixture between the second and third place teams in the Southwest Conference. Slammers are undefeated on the campaign with a 4-0-2 record. Real So Cal is 6-2-1 on the season. Luisa Delgado Heinz leads the Real So Cal attack with seven goals and two assists. The two teams played to draws (1-1 and 2-2) last season in their only meetings.

FC Virginia squares off against McLean Youth on Saturday in an important Chesapeake Division showdown. FC Virginia is 4-0-1 on the season while McLean is 4-1. Amy Thompson spearheads the Virginia attack with two goals and six assists to her name.

TSC Hurricane is looking to keep hold of its top spot in the Texas Conference this weekend with games against AHFC and Lonestar SC. TSC’s dynamic attack has been difficult to stop with 20 goals in eight games, which leads the conference. Nayeli Perez leads the team in scoring with six goals to her name.

West Florida Flames is trying to extend its unbeaten run from three games to five with two fixtures on the docket for this weekend. The Flames take on Birmingham United on Saturday and then Concorde Fire on Sunday. The Flames have relied on a balanced attack through the start of the season with five players scoring a goal already.

West Coast FC looks to bounce back for its first last of the season last weekend with a game against Eagles Soccer Club on Sunday. West Coast remained in the top spot in the division despite the loss, but can’t afford to drop points two weeks in a row. Eagles ran its unbeaten streak to seven games with a 1-1 draw against Slammers last week. Tara McKeown leads the team in scoring with eight goals.

Dallas Sting’s showdown against Solar Chelsea Soccer Club in the U17 age group is another matchup between the top two teams in the Texas Conference. Sting sits in first place with a 7-0-1 record. Cyera Hintzen leads the attack with five goals and an assist to her name.

Sporting Blue Valley takes on Vardar twice this weekend with a game on each day. The two fixtures will have a huge influence on the Midwest Conference standings at the two teams currently sit in the third and fourth spots in the table.