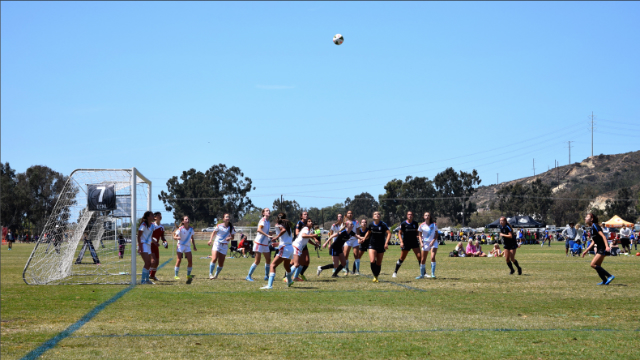 The ECNL, the top club soccer league for girls soccer in the United States, enters the final days of the 2015-2016 regular season this weekend. The concluding weekend of play is full of meaningful fixtures as teams try to jump into playoff spots at the end of a long campaign.

TopDrawerSoccer highlights some of the teams in the playoff battle this weekend below.

The spots for the U14 playoffs are pretty much locked up, as there are only a handful of games on the schedule. The U14 age group only features 16 teams in the playoff format and the champion is crowned during the weeklong competition in Southern California at the end of June.

The lone game that could hold some meaning would be the meeting between Eclipse Select Soccer Club and Sockers FC on Sunday. Sockers needs a win to lock up the spot in the playoffs with Minnesota Thunder Academy right on their heels. The Illinois club looks to be in a good spot with this game though. Eclipse Select Soccer Club defeated Sockers FC 10-2 in the first meeting this season. Eclipse Select forward Kalyssa Van Zanten is one of the best in this age group, and could be the key to getting this group into the playoffs this summer.

In the U15 age group, Sporting Blue Valley is the team to watch this weekend. Sporting hits the road for games against Minnesota Thunder Academy and FC Wisconsin Eclipse. Heading into the final two games, Sporting Blue Valley is in eighth place in the WildCard standings. Sporting needs four points from the two games to jump into a spot in the top six. The squad is going to have to do without U.S. Youth National Team defender Maycee Bell who is in Europe with the U17 Women’s National Team.

The drama is largely removed from the U16 age group. The limited action in the ECNL this weekend means that the teams in the playoffs have locked up spots. The lone game that could mean something for the postseason is in Ohio Valley Division. Ohio Elite Soccer Academy battles Indiana Fire Juniors on Saturday. Both teams are currently in playoff spots for the Champions League entering the weekend, but the game holds significance for standings in the division. If Indiana Fire Juniors wins, Ohio Elite Soccer Academy would drop into fourth in the division. Indiana Fire Juniors won the first meeting between the two teams this season. Julianna Stureman and Katherine Soderstrom each scored a goal in the win. Cassidy Lindley assisted on both goals. Mackenzie Wood logged the shutout in net for Fire.

The Eclipse Select Soccer Club versus Sockers FC battle holds some meaning in the U17 age group as well as the U14 division. Eclipse is in the playoff picture, but in a precarious spot. Eclipse needs a win or draw on Saturday to keep hold of that spot. Eclipse won the first meeting between the two teams 1-0 on May 22.