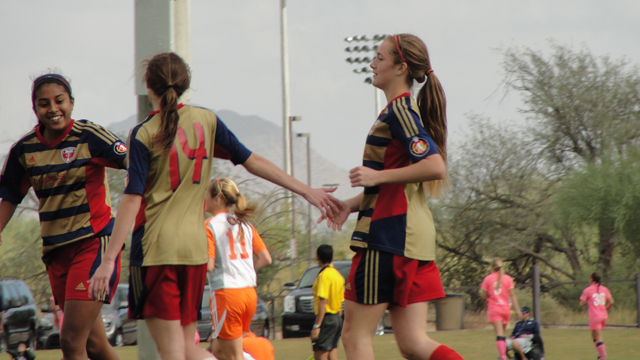 The first national event of the season is this weekend as teams head to the Reach 11 complex in Arizona for their first taste of action against out of conference opponents. The games kick off on Friday morning from the picturesque complex.

Solar Chelsea Soccer Club takes on San Diego Surf on Sunday in a matchup between the top two teams in the ECNL at this stage of the season. Solar is 9-0 on the season with a ridiculous +24 goal differential. Goalkeepers Tatum Sutherland and Emily Pierce have combined to only let in one goal this season. Sutherland and Pierce will be tested against Surf with leading scorer Mia Fishel up to 12 goals this season.

FC Virginia makes the long trek to Arizona for games against Colorado Rush, SC Del Sol, and Las Vegas Premier. FC Virginia is in the early stages of its season with a 4-1-1 record. The balanced Virginia attack already scored 22 goals through those six games.

Sporting Blue Valley also takes the show on the road with games against Mustang SC, Dallas Sting, and AHFC over the course of the three-day event. Sporting is riding an eight-game unbeaten run into the event.

Charlotte Soccer Academy also makes the lengthy jaunt to Arizona for the showcase this weekend. Charlotte takes on Slammers FC, Pleasanton Rage, and Real Colorado. Charlotte is in fifth in the national standings with a 9-2 record. Charlotte leads the nation in goals scored with 50. Courtney Walker, Ashlynn Serepca, and Mary Elliott McCabe have combined to score 32 of those goals.

Colorado Storm takes on Dallas Texans, Birmingham United, and Slammers FC during its stay in Arizona. Storm is trying to make up ground in the Champions League Qualification this week.

TSC Hurricane (Tulsa) has a tough road to navigate in Arizona with games against Eagles Soccer Club, West Coast FC, and FC Virginia. All four of those teams sit in the top 18 in the Champions League Qualification. It’ll be a battle for Tulsa to keep the 2.42 points per game standard intact.

CASL also takes on some big challenges over the weekend with games against FC Dallas, SLSG-MO, and Solar Chelsea Soccer Club. CASL is in the early stages of the season with a 5-1-1 record and looking to make up ground in the Champions League standings. Robin Pollard leads the team in scoring with five goals.

GSA takes a five-game unbeaten streak to Arizona for games against San Juan Soccer Club, Real So Cal, and Challenge SC. GSA’s stout defense has been the key lately with four shutouts from its last five games.

Santa Rosa U17 only won one game last season, but this year’s Santa Rosa squad is 2-0 and flying high. Santa Rosa will be put to the test this weekend with games against Real So Cal, Dallas Sting, and Concorde Fire at the Reach 11 complex.

Colin Clark’s Colorado Rush U17 squad is in action this weekend with games against FC Wisconsin Eclipse, Birmingham United, and Atlanta Fire. Rush is 4-2 on the season. Air Force commit Breeana Bezdek leads the way with three goals.