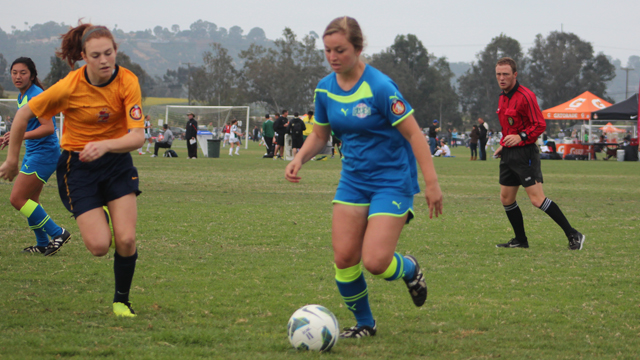 The ECNL continues to churn toward the postseason this weekend, but it’s only a small slate of games on the schedule. Regional clashes in Las Vegas and Virginia highlight the limited number of fixtures.

At the Reach 11 Complex in Arizona, Sereno Soccer Club and SC Del Sol hosts Las Vegas Premier SA and Heat FC over the weekend. The four teams are looking to pick up some momentum as they head toward the final months of the season.

Southwest Conference leaders So Cal Blues takes on Strikers FC and Arsenal FC over the weekend. Blues are 10-0 in conference play and have only conceded one goal in what can only be described as a dominant season.

The game of the weekend may be in Texas though as Solar Chelsea Soccer Club takes on D’Feeters Soccer Club in a battle for third place in the conference. Solar, currently in fourth, won the first meeting this season between the teams 4-1 thanks to a pair of goals from MacKenzie McFarland and a pair of assists from Courtney Sebazco.

Bethesda SC hits the road for a pair of games at Striker Park this weekend with tilts against Virginia Rush and Richmond Strikers on the schedule. Bethesda is 2-0-1 at this early stage of the season for the Maryland club. Olivia Kane has been the one pulling the strings in the attack for Bethesda with five goals and five assists to her name.

So Cal Blues returns to ECNL play and puts its undefeated record on the line this weekend with games against Strikers FC and Arsenal FC. Blues are 7-0-2 on the year and difficult to score on with only three goals conceded in conference play. Isabella Bellinghausen leads the attack with eight goals.

Every team in the NorCal Division is in action this weekend with the exception of MVLA. Santa Rosa United faces Pleasanton Rage and Mustang SC takes on San Juan Soccer Club on Saturday. San Juan also faces De Anza Force with that tilt on Sunday.

Scorpions SC returns to ECNL play on Sunday after being on break since December. The Massachusetts club takes on Connecticut FC, which should be a very competitive battle. Scorpions have a very organized defense that has only let in one goal in four games.

PDA faces World Class FC on Saturday in an important Metro Division battle. The famous New Jersey club sits in third in the division while World Class is in second, but its only in the infant stage of the season for those clubs. PDA has an impressive roster that includes U17 Women’s National Team midfielder Taylor Racioppi.

Maryland United takes on Richmond Strikers and Virginia Rush as Shannon Cirovski’s side looks to push up the national standings as it enters the busy part of its schedule. Richmond Strikers will be a handful though as Elizabeth Ball has been on a tear in the ECNL with 13 goals in 13 games this season.