ECNL Preview: The busy month of May 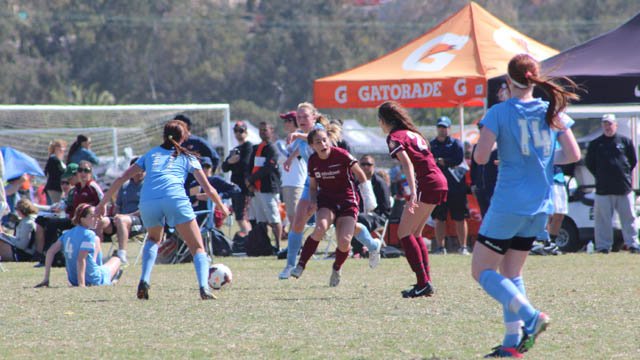 It’s an extremely busy weekend in the youngest age group of the ECNL as the U14s have a couple of events on the schedule. The Mesa Complex in South Carolina plays host to 22 teams. The best matchup from that location looks to be the Saturday evening tilt between Charlotte Soccer Academy and Bethesda SC. Charlotte is 18-1 on the season while Bethesda is 11-0-2. CSA’s prolific attack has been the story as four players have scored over 10 goals this season with midfielder Ashlynn Serepca leading the way with 20 goals in 23 games. Bethesda counters with a strong defense that has only let in five goals in 13 games.

There are 22 teams also headed to Overland Park, Kansas this weekend for another U14 event there. Dallas Texans against Michigan Hawks on Saturday evening is shaping up to be the talk of the event. Both squads are in the playoff picture, but need to secure points from that game to stay in frame. Texans’ stout defense will need to be wary of Hawks’ Madison Donley who has 17 goals in 11 games this season.

Outside of the U14 events, there are a few other games on the schedule in the U14 age group. Northern California club Pleasanton Rage is looking to close its season on a high note with games against FC Nova and Utah Avalanche over the weekend. Since returning to ECNL play in March, Rage is undefeated with a pair of wins and a draw.

PDA, the last undefeated team left in the U15 age group, has a three-game week ahead with fixtures on Thursday, Saturday, and Sunday. The New Jersey club opens up against rival Match Fit Academy before facing East Meadow Soccer Club and Albertson Fury over the weekend.

In the Southwest Conference, the second and third place teams play twice this weekend as Eagles Soccer Club heads to San Diego to take on Surf. Eagles duo of Tara McKeown and Brianna Welch will have to keep pace with Surf’s Catarina Macario, who has 20 goals in 17 games.

NC Fusion closes out its regular season this weekend with games against Internationals SC and OP Ohio Premier. Fusion is in the 31st spot in the champions league standings, which means that a six-point weekend is imperative for postseason aspirations. Brooke Bingham has been the one leading the charge for Fusion this season with seven goals. Naomi Powell has been the friendly helper with eight assists.

There is a key fixture for postseason standings in Texas on Saturday when Dallas Sting takes on FC Dallas. Sting won the first meeting this season, which was the first game of the ECNL campaign for both teams. Ellis Miller scored the lone goal off an assist from Stefani Doyle. Since then, FC Dallas has won 11 of 15 games and sits in second in the Texas Conference.

While other teams are wrapping up their seasons, OP Ohio Premier enters the busy month of the calendar. OP plays eight games in May. The opening weekend features tilts against CASL and NC Fusion. CASL is just off pace for a wild card spot and needs two wins this weekend to keep that dream alive. The North Carolina squad also plays against Internationals SC on the trip through Ohio. Forward Morgan Goff leads CASL in scoring with 15 goals in 22 games.

Penn Fusion SA is also starting a busy May with nine games ahead this month. Fusion opens up with FC Bucks on Sunday.  The aptly named Megan McCool has the honors as the top scorer for Fusion with 18 goals in 16 games.

FC Bucks’ quest for a wild card spot heats up on Sunday as the squad kicks off a busy May. Bucks are 4-4-3 in conference play and looking to pick up some wins over the next few weeks. Leading scorer Dakota Mills will likely be at the forefront of that effort as she has 11 goals in 16 games this season.

MVLA is also in need of some wins with the postseason quickly approaching. The Northern California club takes on Utah Avalanche and FC Nova over the weekend. Recent UC Santa Barbara commit Shaelan Murison Brown will be looking to add to her seven-goal tally on the season.

The battle for the top seed in the champions league standings is heating up as Internationals SC, Real So Cal, Michigan Hawks, and PDA are all very close together at the top of the table. Internationals SC face a two-game schedule this weekend with games against NC Fusion and CASL. Real So Cal takes on So Cal Blues on Sunday in an important fixture for standings on the national stage as well as the local level. PDA, like its younger squads, has a three-game schedule with Match Fit Academy, East Meadow, and Albertson in a four-day span.