WAUKEGAN, ILLLINOIS – The conditions were adverse to say the least, but every game must have a winner, and Thursday saw semifinal berths earned in the U16, U17 and U18 age groups here at the ECNL National Championships.

Reports can also be seen from Day One, Day Two, Day Three and Day Four

(Scroll Down for Complete Thursday Results)

These teams saved some of their best until the end, with a 20-minute overtime session providing a lot of offense. In the end, Mike O’Neill’s PDA Slammers team defeated an excellent Michigan Hawks team 3-2 in overtime.

At the beginning of the match the teams were scratching and clawing for position, sometimes literally. PDA’s Lauren Jankowski seemed to have a knack for getting under the skin of some of the Michigan players, while Hawks’ Michigan State-bound midfielder Morgan McKerchie was also on the receiving end of some rough treatment.

PDA’s Meghan MacDonald had a long-range free kick that Hawks’ goalkeeper Heather Rolls had to tip over the bar. MacDonald provided a number of good serves through the match.

Michigan’s Megan Buckingham, a North Carolina verbal commitment, is especially dynamic in the forward third. Her slashing runs with and without the ball will give any defense fits. Her teammate at Hawks, Ashton Miller, will be her rival in ACC play in a couple of years, as Miller is a verbal to Duke. Miller is exceptional at distributing as well as linking the defense and the attack. A third Hawks player, defender Ally Haran, will join the ACC party at Wake Forest.

Hawks’ best 1st half chance came on a nice passing move involving Buckingham, McKerchie and Kendall Kramer, but PDA defender Christine Monroy did well to clear the danger. PDA’s Colby Ciarrocca found herself behind the Hawks defense late in the half, but Rolls came off her line decisively to make the save, and the teams went to the break scoreless.

PDAs Lauren Dimes made a surging run into the Michigan end early in the 2nd half, but Alex Lowes took care of business with a decisive challenge. PDA midfielder Anna Conklin put in a good shift in midfield, mixing some good passes with tough tackling. 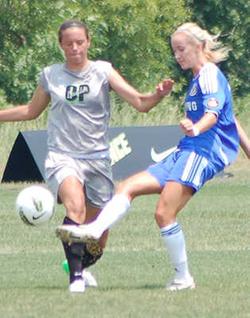 The New Jersey side went on top 1-0 when a corner kick by MacDonald managed to find its way to the back of the net. Michigan equalized a few minutes later when, after Buckingham earned a corner, she and Miller worked a little short-sided magic to give Miller a shot on goal. The PDA keeper appeared to have her line of sight obstructed by McKerchie and just managed to push it away at the last moment. Haran was on the spot however and banged home the rebound to make it 1-1.

PDA pressured for a winner in the closing minutes of regulation, with Rolls keeping out efforts by Schuyler DeBree and Jessica Puchalski, and the match went to overtime.

The PDA momentum continued however and it was Lauren Jankowski scoring what would be the winning goal with a strike from the edge of the area. Colby Ciarrocca then iced the match with a strong individual effort to run onto a ball, fight off a challenge and lob the onrushing goalkeeper to make it 3-1.

Michigan’s Miller converted a pass from Buckingham to make the score 3-2 with just seconds remaining, but PDA was able to advance to the semifinals with the win.

Apparently the CASL U17 team coached by Damon Nahas has been training on field turf in the hot North Carolina weather. Maybe this is why they seemed so resilient throughout their match in the muggy conditions here Thursday. The team carved out a workmanlike victory over a talented Ohio Premier that seemed to wilt a little over the final 45 minutes of the match.

Ohio Premier’s Emily Geyer showed good footskills and put in some good serves while defender Katie Mazurek covered a lot of ground in the back and distributed well. Canadian U17 National Team player Lindsay Agnew was dangerous coming forward from her right back spot, but in the end the CASL defense and goalkeeper Taylor Francis were up to the challenge.

CASL’s Cameron Castleberry and Paige Reckert both showed some excellent skill in scoring goals minutes apart in the 2nd half. Here the CASL goal scorers discuss the plays that made it 2-0 and also the team’s conditioning (Editor’s Note: In the question,  I mistakenly said they looked fresher than their teammates as the game went on, when I meant fresher than their opponents. I think Cameron and Paige knew what I meant, but just for the record…)

Joanna Boyles covered a lot of ground in midfield for CASL, and nearly scored a third CASL goal off a smart 1-2 with forward Maya Worth. Their teammate Alexis Shaffer provided some additional dangerous moments in the attack, utilizing a quick turn and striking ability that Ohio Premier goalkeeper Anna James-Buhigas did well to match with saves.