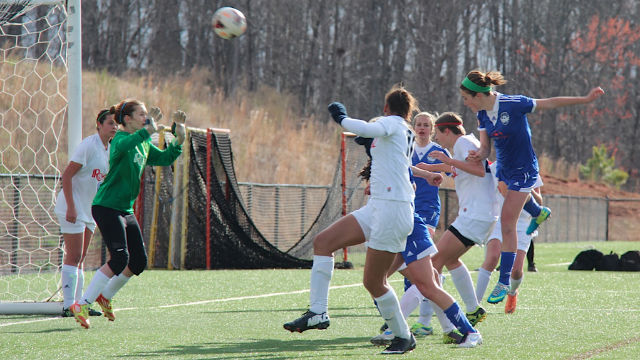 A four-goal outing from Mackenzie Pluck helped FC Bucks to win a shootout, 5-3 over Albertson Fury SC. Caitlyn Cliggett chipped in a pair of assists, while Gennavieve Obringer scored the fifth tally for Bucks. Pluck provided the finishing touches on Sunday as well, scoring twice in a 2-0 defeat of East Meadow SC.

Two goals from Ashlyn Farino helped Arsenal FC to a 5-0 defeat of Heat FC. Also finding the back of the net was Victoria Esquivel, Rae Perez and Sophia Saldivar. Arsenal made it two wins in two games over the weekend, defeating Las Vegas Premier 1-0 thanks to Madison Taylor Fortich’s goal, set up by Farino.

Mid-Atlantic Conference play was substantial over the weekend, as FC Virginia matched up against Maryland United FC and Bethesda SC. FCV was shutout against Maryland, drawing 0-0, but bounced back with a 3-1 win on Sunday. Katie Le and Gabriella Gordon teamed up for all three goals for Virginia – Gordon opening the scoring off of a service from Le, then setting up Le for the games other two goals.

A brace by Jordyn Geller along with a Courtney Worstell strike gave Real So Cal a 3-0 win against SC Del Sol. Worstell also struck in a 3-2 win over Sereno. Veronica Merrill and Brooke Wynalda each scored for So Cal as well, while Chloe Christakos and Brianna Atterbury provided the consolation for Sereno.

A triumvirate of goals supplied by Ansley Bunger, Allisyn Gardner and Rheagen Smith propelled Dallas Texans to an important 3-0 victory against TSC Hurricane.

Haley Berg and Bayleigh Chaviers each bagged a goal apiece, guiding Dallas Texans to a 2-0 victory against TSC Hurricane. Chaviers also set up Berg’s goal, while Carina Baltrip-Reyes supplied a helper as well.

Four different players scored for Sereno SC – Olivia Hernandez, Kathryn Jacobellis, Sophia Struckman and Megan Wright – as they saw off the challenge of Eagles SC in a 4-2 win. Devon Medina and Amber Mulligan got on the score sheet for Eagles. In Sunday’s action, Sereno drew 1-1 against Real So Cal.

Match Fit Academy won a pair of games over the weekend to remain unbeaten in ECNL action so far this season. The New Jersey club narrowly edged Scorpions SC on Saturday, as Remy Borinsky’s two goals along with the winner from Hana Kerner secured a 3-2 victory. Abbey Clapp and Alexandra Spangler provided the scoring for the Scorpions. In a Sunday matchup with FC Stars of Massachusetts, Kayla Jennings opened the scoring before Kerner added a pair of goals late on to secure another win for Match Fit, this time 3-0.

A hat trick from Courtney Jones supplied the majority of the offense as Carmel United topped division rivals Ohio Premier by a 4-1 score. Amanda Shaw chipped in a goal and an assist for Carmel, while Madison Costner grabbed Ohio’s consolation. Amber Hoot and Sara Osinski were the goal scorers for Carmel in a 2-1 win against Internationals on Sunday.

Mustang SC won its lone game of the weekend, a wild encounter with Santa Rosa that finished 4-3. Hailey Balma, Anyssa Dominquez, Madeline Gibson and Taylor Hopkins scored for Mustang, while Brooklyn Varnadore scored twice and Mariah Meza one in the losing effort.

Wrapping up its regular season slate on home turf, McLean Youth Soccer topped local rivals Bethesda SC and Maryland with 3-0 and 4-0 wins respectively. McLean is currently tied with CASL atop the Chesapeake Division in the Midatlantic Conference.

Four goals from Strikers FC attacker Maggie Ramsey were plenty of offense, as the California club cruised to a 4-1 win against Las Vegas Premier. Sarah Fajnor stepped up on Sunday for Strikers, scoring twice in a 3-0 win against Heat FC on Sunday. Niki Voulgaris rounded out the scoring.

Rebecca Harrison’s two-goal effort supplied most of the offense as Real So Cal held off SC Del Sol 3-1 over the weekend, with Brittney McKinney also scoring. Two goals and an assist from Noel Askins on Sunday were also pivotal for Real So Cal in a 4-0 win over Sereno SC. Harrison also tallied in that win.

Alexandra Karlowtisch, Kaitlin Klawunder and McKenna Roth each found the back of the net as So Cal Blues earned a 3-0 victory against Cali rivals West Coast FC. The Blues kept up with Conference leaders Real So Cal.

The dominance of the season continued for PDA, which has yet to allow a goal during the current ECNL campaign. The powerhouse first blanked Connecticut FC 2-0 behind goals from Bree Livingston and Katelyn Waters. They followed that up with a 7-0 defeat of SoccerPlus Elite, as Colby Ciarrocca scored three goals and had two assists, Meaghan Mulligan scored twice, and Laurn Jankowski score and had three assists.