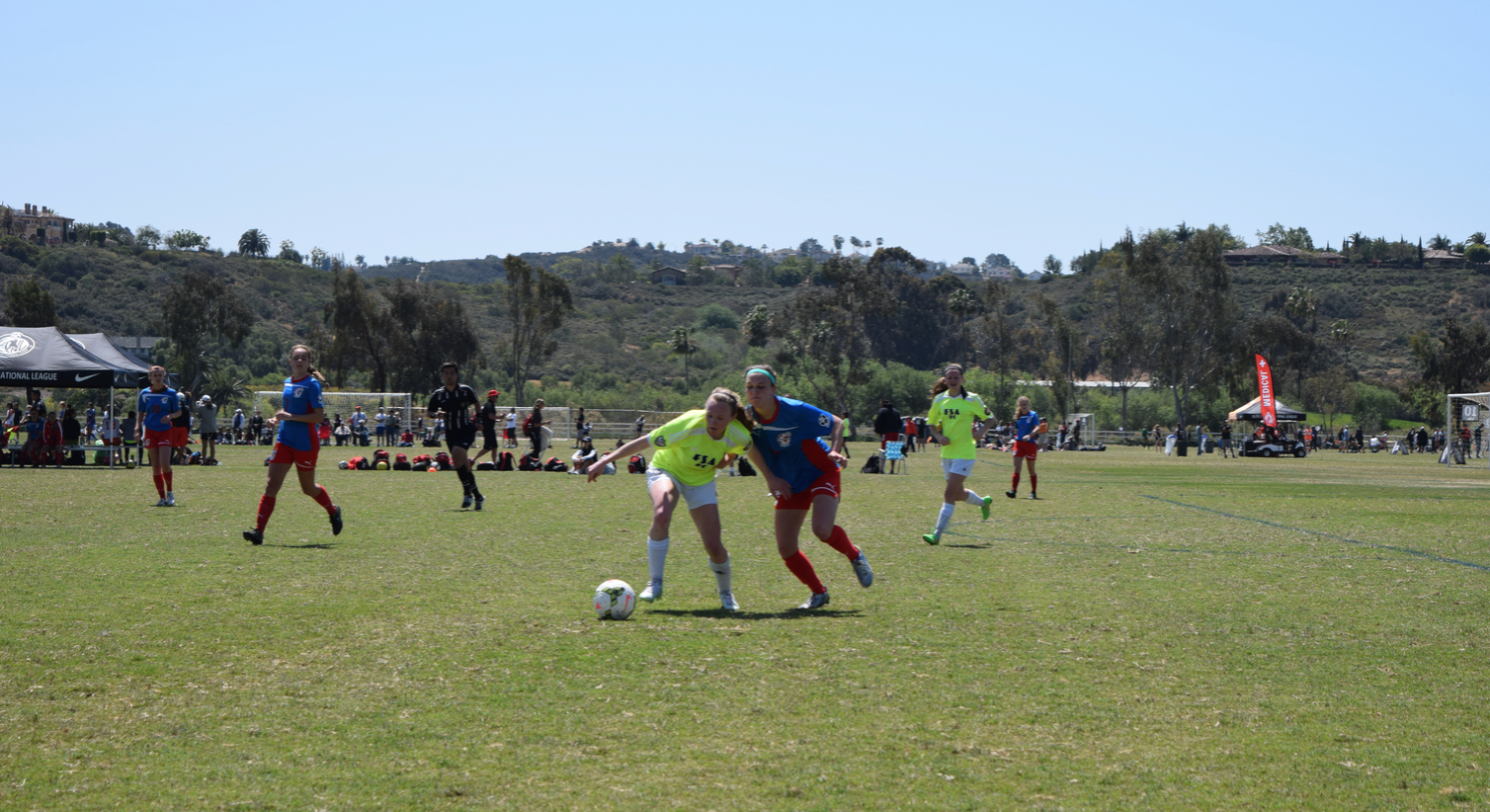 SAN DIEGO, California – The games continued at the ECNL National Event in San Diego on Saturday. The action on the second day among the games witnessed by TopDrawerSoccer was punctuated by close play between the teams.

Below is a recap of the games that TopDrawerSoccer watched on the second day:

In a first half that featured very compact play in the midfield from both teams, Michigan Hawks got the edge courtesy of a late first-half goal from forward Alexxis Lipsey. In a play that showed off her persistence more than the skill she displayed throughout the game, Lipsey shot the ball in traffic in the box, then followed the shot after it was partially blocked, and outraced Colorado Storm goalkeeper Caitlin McPherson to push the ball in and put the Hawks ahead.

The momentum moved somewhat after the break, as the slight edge in possession from Colorado moved over to the Hawks, as they attempted to add to their lead and sprayed shots all around the goal. One corner midway through the second half by the Hawks came close to creating an own goal, but Alexis Loera’s clearance for the Storm sliced out of harm’s way in the end. Michigan also had a late shot bounce off the crossbar, but remained secure enough in the back to prevent an equalizer.

Colorado’s Aimee Thorstensen nearly came up with the most dramatic of equalizers, by sending an excellent shot goalward on the final kick of the game, but the chance went just wide.

Certainly the fastest-paced game of the day, Richmond overcame an early deficit to take the lead themselves and hold onto it for the remainder of the match.

De Anza started the game very well, and were rewarded with a  goal inside the first few minutes of the match. A low cross from the left side was chipped in neatly by Nikki Lee, and it appeared the Force would be off to the races.

Almost instantly, however, United raised their intensity and wrestled control from their opponents. About 10 minutes after the opening goal, they knotted up the score, courtesy of a neat dribble through traffic and a confident finish. Richmond continued to look for the go-ahead goal from there, and found it when Hannah Potter took a nice through-ball on a diagonal run, and slotted it in easily.

The teams exchanged chances in the second half, and although De Anza had more of the ball, Richmond had more of the quality looks, most notably a pair of shots from Paige Franks, including one that forced a good save from De Anza ‘keeper Rebecca Burton. In the end, Richmond deserved the win, but it was an intense affair throughout.

FC Stars of Massachusetts U17 0-1 Michigan Hawks U17

The most intense game of the day, however, was the narrow win by the Hawks over FC Stars. Tight in the earlygoing, the game remained a stalemate in both quality of play and score in the first half, before the Hawks grabbed the upper hand following the break.

The teams exchanged looks on goal in the first half, with perhaps the most audacious coming from Hawks’ Emma Tokuyama, who took a low cross from a teammate in FC Stars’ box and backheeled a shot on goal, but the chance was saved. Stars attempted a backheel of their own in the other box shortly thereafter courtesy of Andrea Gilmore, but it was also saved.

The breakthrough of what became an increasingly physical game came midway through the second half, after the Hawks had gained some rhythm on the ball and were connecting passes in the final third. Madison Myers sent a quick one-two to Natalie Winters, whose initial shot was blocked. But Myers didn’t give up on the play, as she followed the blocked ball and sent a terrific chip over the outstretched arms of the Stars’ goalkeeper.

To preserve the narrow lead, Katelyn McEachern made a crucial save for Michigan in the dying moments, laying out to parry a shot after a lapse in the defense ahead of her.