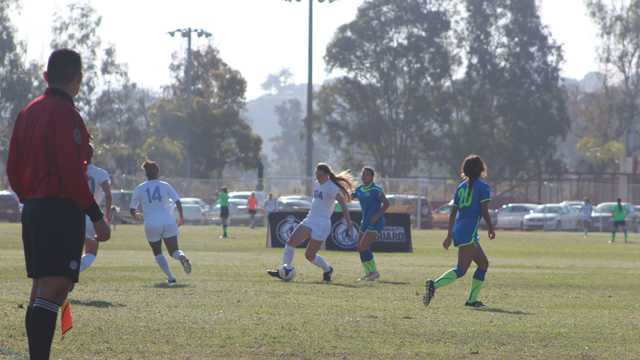 The ECNL season has been in swing for nearly four months, but some teams were getting their first taste of the action over the weekend. Check out which teams came bursting out of the gate in this week’s ECNL Recap.

Solar Chelsea Soccer Club continued its dominant run of form over the weekend with a pair of wins in Texas Conference play. Solar defeated Challenge SC 3-1 on Saturday. Challenge became the second team in the conference to score on Solar after 10 games played. Allie Byrd earned the honor with the goal for Challenge. Solar goalkeepers Tatum Sutherland and Emily Pierce have been in net to shut down the attack of nearly every team that the Dallas club has faced this season. Sydney Nobles led the way for the Solar attack with a goal and an assist. Solar followed that up with a 3-0 win over Texas Rush on Sunday.

Bethesda improved to 6-0-1 in conference play with a pair of wins over the weekend. Bethesda defeated NC Fusion 3-1 and CASL 3-2. Following the successful weekend, the Maryland club is on break from conference play until March.

World Class FC opened its season with a 2-1 win over PDA on Sunday in the Northeast Conference. World Class FC plays two more games before heading to Florida at the end of the month for the next ECNL event.

FC Portland opened its season in commanding fashion with wins over Utah Avalanche and FC Nova. Portland defeated Avalanche 2-0 thanks to goals from Emma Treasure and MaKayla Woods. Taylor Menkens and Alyssa Tomasini registered assists in the victory. Portland followed that up with a 4-1 win over FC Nova. Menkens had a pair of assists to spur Portland on.

Dallas Texans picked up a pair of wins over the weekend in the team’s last action until February. Texans beat Texas Rush 4-0 on Saturday and then defeated Challenge SC 3-2 on Sunday. Maya Warrior and Rachel Wasserman both score two goals in the 4-0 win over Rush.

Richmond United notched victories over Ohio Premier and Internationals SC over the weekend. Richmond beat both teams 2-1 on the road. Riley Cook and Taylor Guy scored on Saturday in the win over Ohio Premier. Cook had both assists on Sunday with Morgan Hall scoring both goals in the win.

SLSG – MO handed Eclipse Select Soccer Club its second conference loss of the season on Saturday. Kayleigh Stahlschmidt scored the lone goal off an assist from Mallory Stock. Goalkeepers Jalin Stelzer and Kayley Jones anchored the defense for the shutout.

Penn Fusion opened the season with a close victory over FC Bucks on Saturday. Fusion used goals from Cashlin Copley, Malissa Moore, and Gianna Yurchak to capture a 3-2 win at home. Casey Kilchrist led the charge for FC Bucks with a goal and an assist.

Maryland United opened the season with wins over CASL and NC Fusion. Maryland beat CASL 4-1 on Saturday thanks to goals from Nia Dorsey, Abbigale Ellis, Alyssa Hill, and Gabrielle Vincent. Dorsey struck twice on Sunday to lead Maryland to a 3-1 win over NC Fusion.

Richmond United had a good showing over the weekend with a four-point performance. Richmond played to a scoreless draw against Ohio Premier on Saturday. The Virginia club followed that up with a 3-1 win over Internationals SC on Sunday. Virginia Jesselson led the way with a goal and an assist.

Match Fit Academy opened the season with a pair of victories last week. Match Fit beat FC Bucks 4-0 on Wednesday night. Hana Kerner scored twice with Bridgette Andrzejewski and Tanika Roach each adding a goal apiece. Match Fit followed that up with a 3-0 win over Continental FC Delco on Sunday. Amanda Carolan scored twice in the result over the weekend.

PDA also got off to a hot start over the weekend. PDA topped World Class 4-1 thanks to a hat trick from Taylor Racioppi. Haley Crawford added the other goal in the lopsided win.