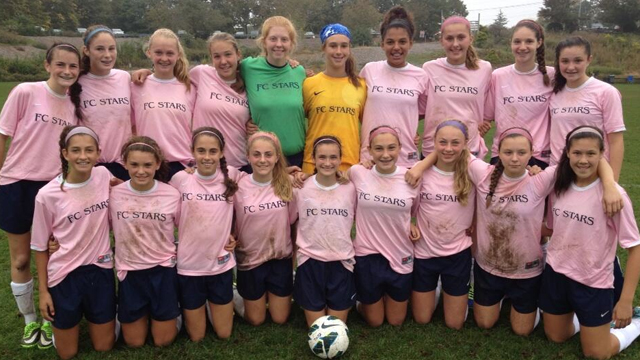 Texas Rush enjoyed a good start to October with a 3-2 win over FC Dallas on Saturday. Part-time goalkeeper and part-time forward Jasmine Richards scored twice for Rush in the win. Maggie Falchek added the other goal while Zoe Jessen and Sarah Piper contributed with assists.

PDA stretched its unbeaten run to five games with a 4-1 win over World Class FC on Saturday. Amelia Paternoster, Jessica Schildkraut, Brianna Urbanski, and Luciana Zullo scored for PDA. Julia Moran, Gabriella Provenzano, and Schildkraut were awarded with the assists.

McLean Youth Soccer battled to a tight 1-0 win over FC Virginia on Saturday in a Chesapeake Division showdown. Caitlin Moon scored the lone goal off an assist from Jill Gollob. Tailor Gammons recorded the shutout in goal for McLean.

FC Stars of Massachusetts continued their dominant start to the season over the weekend with a 4-0 win over Albertson Fury and an 8-0 win over East Meadow Soccer Club. Stars have scored 32 goals this season and only let in two through the first five games.

Mustang SC picked up its second win of the season on Saturday with a 5-1 victory over San Juan Soccer Club. Kaci Trujillo, Maya Nielan, Olivia Mayeda, Samantha Frost, and Kira Debro scored for Mustang SC. Nielan also had two assists on the day. Rachel Murphy was also credited with an assist as well.

Carolina Elite Soccer Academy kept hold of its spot at the top of the Southeast Conference with a 3-2 win over Charlotte Soccer Academy over the weekend. Kathleen Colwick dished out an assist, which pushed her to six already on the season. Esther Anderson led the attack on the day with a goal and an assist. Samantha Britt and Austin Seelbach also scored for CESA.

TSC Hurricane beat Challenge SC 4-1 on Sunday in a Texas Conference showdown. Hurricane’s Nayeli Perez scored her fifth and sixth goals of the season to headline the attack for the Oklahoma squad. Parker Goins also claimed her sixth goal of the season while Isabella Beffer scored her second. Taylor Malham and Perez had the assists for the winning side.

San Diego Surf conceded its first goal of the season on Sunday, but still pulled out the 2-1 win over Strikers FC. Olivia Erlbeck and Taylor McMorrow scored for Surf, which improved to 3-0-0 on the season. Dana Dalton and Erlbeck had the assists on the goals.

Atlanta Fire used a tally from Stephanie Lee and assists from Alyssa Beck and Ambria Shutts to defeat VSI West FL Flames 2-1 on Sunday and move into third in the Southeast Conference. Fire also won its game on Saturday against Orlando City YS 3-2. Taylor De Graaf, Kendall Towe, and Shutts scored in that game.

FC Virginia improved to 4-0 on the season with a 4-0 win over McLean Youth Soccer on Saturday. Emily Fox and Julia Phillips both scored two goals for top team in the Chesapeake Division. Emma Kershner, Sierra Lam, and Alexandra Littlefield contributed with the assists.

GSA improved to 8-0-0 on the season with a pair of victories over the weekend. GSA opened up Saturday with a 4-2 win over VSI West FL Flames. Sh'Sh'Nia Gordon scored twice for the Atlanta club, which also used goals from Ella Stevens and Jennifer Westendorf to cruise to victory. Morgan Beans and Kalli Vogel had the assists. On Sunday, GSA crushed Orlando City YS 10-2. Westendorf, the recent verbal commit to Notre Dame, scored four goals. Halle Huff and Stevens each added two goals to the score. Dena Cisic and Amanda Vocelka netted one goal each to hit the double-digit total.

MVLA recorded its second win of the season with a 4-1 victory over Pleasanton Rage on Sunday. Marissa Hing, Paulina Llama Bringas, Shaelan Murison Brown, and Tia Painilainen each scored a goal. Erica Higa, Gabrielle Lopez, Emma Wangsness, and Hing all finished with an assist.

So Cal Blues picked up a 3-0 win over Eagles Soccer Club on Sunday to improve to 4-0 on the season. Kellsie Gleason scored twice and McKenna Roth added the other in the shutout victory.

CASL enjoyed a four-point weekend with a 1-1 draw against Richmond Strikers on Saturday to kick things off. Morgan Reid scored the goal for CASL while Elizabeth Ball found the back of the net for the Strikers. CASL returned to play on Sunday with a 9-0 win over Virginia Rush. Mary Gracin Palmer had a hat trick in the win. Bayley Rigsbee had two goals and three assists. Colleen Markey scored twice and added an assist as well. Kenley Sigmon recorded four points with a goal and two assists. Dominique Babbitt scored a goal too in the big win.