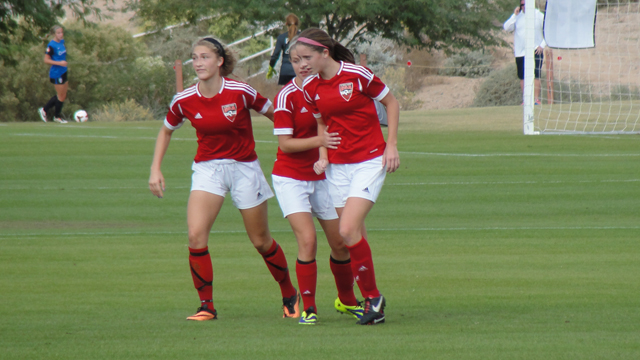 PHOENIX – The first National Event of the 2013-14 ECNL season kicked off on Friday at the Reach 11 Sports Complex. With clubs from all across the country descending on Arizona for the three-day event, the level of soccer was expected to be high quality and the opening games did not disappoint.

Below is a sampling of the action from Friday. Check back throughout the weekend for recaps from every day in Phoenix.

The Georgia club, Gol Soccer Academy, gave up an early goal, and then rolled to an impressive result against a very strong Eclipse side in the first game of the day from Field 12.

Maya Neal scored the opener after 10 minutes when she brought down a chip from Karly Stuenkel inside the box and smashed her shot into the back of the net. Neal’s goal was the 11th of the season for the Tennessee(m) commit.

GSA answered seven minutes with the equalizer when U.S. U17 Women’s National Team forward Jennifer Westendorf hit a rocket off a free kick that tore through the wall and slipped past the goalkeeper.

One minute later, Westendorf nearly gave GSA the advantage when she got on the end of a delightful pass from Ella Stevens, but Eclipse goalkeeper Caroline Brockmeier forced her into a sliding shot. Megan Kalkofen saved Westendorf’s weakened effort from crossing the line.

Eclipse had a good shot at regaining the lead in the 27th minute when Elizabeth Woerner rounded the keeper, but had a tricky angle at the open net. The forward still tried her luck, but Anna Bougas headed it out of danger.

Stevens scored the game-winning goal three minutes later. Westendorf flicked on a pass from Lauren McKeever into the path of Stevens who tallied her 20th goal of the season.

Halle Huff doubled the lead for GSA only three minutes later. The forward struck a beautiful shot from 25 yards out that went over the keeper and into the upper corner of the net.

Westendorf nearly made it 4-1 with three minutes left in the first half when she took on a few defenders before hitting a cracking effort from 20 yards out, but her shot clanged off the crossbar.

Sh’nia Gordon capped the scoring with a goal early in the second half. It was the 11th goal of the season for the West Virginia(w) bound forward.

GSA saw out the final 35 minutes to push its record to a perfect 13-0-0 record with a plus 56-goal differential.

Head coach Campbell Chapman said there was no concern from his group after giving up the early goal.

“The way that we play soccer – we pass the ball, move the ball – we knew that we would get the chances,” Chapman told TopDrawerSoccer.com. “We just had to be patient. It was an early goal, we weren’t too concerned.”

Chapman utilized his full bench during the game, which should set his team up well for the three games in three days structure of the event.

“The most important is to make every player feel they contributed to the success or failure of the team,” Chapman said. “We have some girls who play better over 90 minutes or play better with a little break.”

Part of the added excitement to the opening game was U.S. U17 WNT head coach B.J. Snow in attendance.

“I know that No. 2 [Westendorf] was [aware],” Chapman said with a laugh when asked if his girls were aware that the national team coach was on hand. “It has two components: One – it puts pressure on them to perform; two – out of all the games that B.J. [Snow] could have watched play, he picked our game. I’m thrilled he came to our game.”

Emily Fox scored her 12th goal of the season and helped the Chesapeake Division leader to its seventh win of the season. Fox linked up with her fellow attackers on the way to the lone goal before she ripped a shot from 16 yard out off the far post and into the back of the net.

Taryn Torres scored twice and Solar Chelsea started its weekend with a hard fought win over Sockers FC. Torres netted the opener in the first half off a free kick that found the upper corner of the net.

Sockers answered nearly immediately when Katia Novi hit a rocket that went screaming into the back of the net. The two teams went into the break level on 1-1.

Torres was tripped in the 18-yard-box early in the second half and was awarded a penalty kick. The 14-year-old tucked into the lower corner of the net for her second goal of the game and the game-winner.

Sockers did have a couple of chances to get the squads back on level terms, but the shots just drifted a couple of inches off target. Emma Thomson had the best look when she hit a screamer from the top of the box, but it smacked off the crossbar.