ECNL Recap: Eyes on the Prize 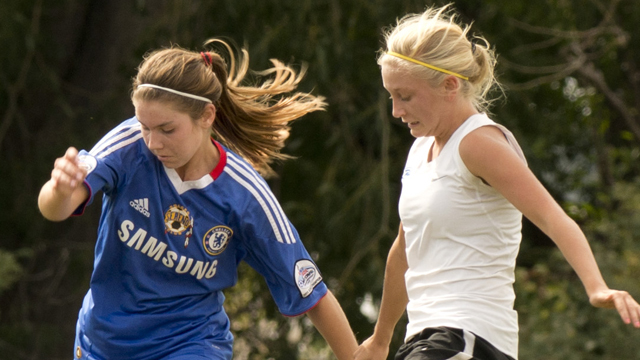 Gabriella Gordon scored with eight minutes left on the clock to help FC Virginia top McLean Youth Soccer 2-1 and remain in the top spot in the Midatlantic Conference. Abigail Rynex scored the opener in the first half for FC Virginia, which held the lead at the break. McLean answered in the second half, but Gordon’s late tally sealed the victory for the conference leaders. 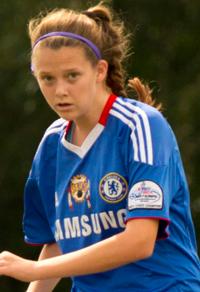 In the Midwest Conference, Michigan Hawks continued its domination with a 5-0 win over FC Wisconsin Eclipse on Saturday. Both Catherine Dager and Alexxis Lipsey scored two goals. Madison Wolfbauer added the other goal for the Hawks, which are 10-0-1 on the season in conference play.

Colorado Storm and Colorado Rush battled to a 2-2 draw on Saturday in an important Mountain West Conference showcase. Storm held onto the top spot in the conference with only five games left on the schedule. Elisabeth Geraghty scored her 21st goal of the season for Storm while Emily Langenderfer added the other. Sofia Weiner had both goals for Rush.

Freestate Soccer Alliance remained undefeated in conference play this season with a 0-0 draw against Ohio Premier Eagles and a 3-1 win over Internationals SC over the weekend. Nia Dorsey, Sarah Osborne, and Kia Rankin scored the goals for Freestate in Sunday’s victory. The Maryland club has six more games remaining on its conference schedule this season.

FC Bucks enjoyed a six-point weekend with commanding wins over SoccerPlus Elite Connecticut and Connecticut FC. On Saturday, Rebecca Collimore and Bidget Galen both scored two goals to help FC Bucks to a 5-1 win over SoccerPlus. Julia Panko had the other goal on the day. Galen added two more goals on Sunday in the 3-0 victory over Connecticut FC. Surprisingly, the four-goal weekend was the first goals of the season for Galen.

In Southern California, San Diego Surf kept its perfect record alive with a narrow 3-2 victory over West Coast FC. Dana Dalton, Eva Herrera, and Taylor Porter scored for Surf while Alyssa Fiddes and Kelley Carusa contributed the assists in the victory. The San Diego club is 9-0-0 in SoCal Conference play, and has a nine-point lead at the top of the table.

Sereno Soccer Club cruised past SC Del Sol over the weekend with a 5-0 win as Sereno tries to chase down Colorado Rush at the top of the conference standings. Haley Adams, Kelly Harris, Allison Raniere, Shelby Rovers, and Natalie Stephens all scored for Sereno in the shutout win.

FC Stars of Massachusetts took over the top spot in the Northeast Conference with a 4-0 win over FC Delco over the weekend. Stars also benefitted from PDA’s 1-1 draw against Penn Fusion on Saturday.

Carmel United remained level on points with Ohio Elite Soccer Academy in the Midatlantic Conference over the weekend. Both clubs picked up six points for their two games with the Indiana club defeating Richmond Strikers and Virginia Rush. Kylie Hohlt scored twice for Carmel United in the 5-0 win over Richmond Strikers on Saturday. Sara Osinski, Madison Lewis, and Maryna Clark all scored in the win as well. Grace Myers and Josie Thurman provided the goals on Sunday in a 2-0 win over Virginia Rush.

LSU commit Jorian Baucom scored her 19th goal of the season on Saturday in a 1-0 win for SC Del Sol over Sereno SC. Jazmarie Mader provided the assist on the game-winning tally. SC Del Sol is 11-1-0 in conference play this season with only two games remaining.

Slammers FC closed the lead on San Diego Surf in the SoCal Conference with a win over Strikers FC over the weekend. Surf was held to a 2-2 draw with West Coast FC, which narrowed the lead at the top of the table to one point. Kayla Mills scored twice for Slammers in the 4-1 win over Striekrs. Sammy Solaru and MacKenzie Cerda also scored in the victory.

Dallas Texans returned from high school break in commanding fashion with a 5-1 win over Challenge SC on Sunday. Texans are 15-0-1 on the season and sit in first place in the national standings with only two games left on the schedule. Wins over Dallas Sting and FC Dallas over the next two weeks would seal up the top spot for the Texans heading into the playoffs.

However, Crossfire Premier is trying to make sure that does not happen, as the Washington club continues to keep pressure on the Texans in the national standings. Crossfire defeated De Anza Force 3-0 on Saturday to keep hold of the top position in the Northwest Conference.