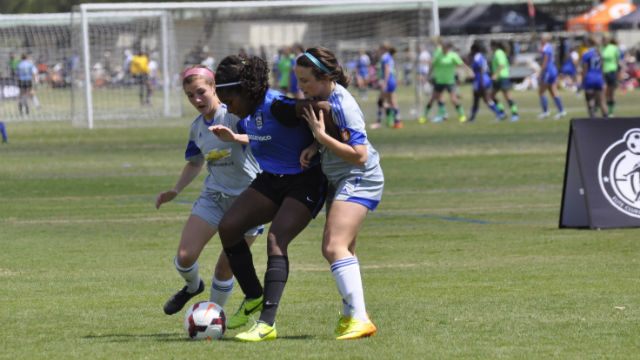 Jessica Schildkraut and Amelia Paternoster each scored twice and assisted as PDA defeated Scorpions SC 5-1. Abby Jonathan provided the other goal of the day. The New Jersey power drew 1-1 on Sunday against FC Stars of Massachusetts.

A trip to Northern California ended with a win and a draw for Crossfire Premier. Venicia Juarez scored twice in a 2-1 win on Saturday over De Anza Force – Sean O’Brien scoring the consolation. Mustang SC got the better of Crossfire on Sunday, a 2-0 defeat for the Pacific Northwest side. 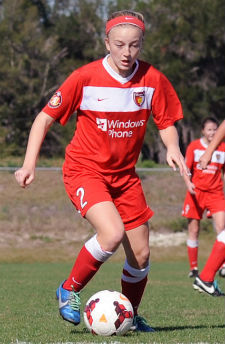 A hat trick from Aliyah Milicia helped Carolina Elite Soccer Academy secure a 5-0 victory at home against Orlando City, with Christy Sheppard chipping in a goal.  Carolina lost in its other game of the weekend, a 1-0 defeat against West Florida Flames. Cheyenne Andrews scored the game’s only goal in that result.

Four different players all found the back of the net for Bethesda SC – Jamie Fink, Olivia Kane, Bryanna McDermott and Ashley Ventura – as they topped Internationals SC 4-0. It was a closer encounter on Sunday, as Nicole Bautista and Fink also scored in a 2-1 win over OP Eagles.

Two goals and an assist from Catarina Macario secured a 3-0 win for her San Diego Surf side in a clash with Slammers FC. Taylor Kornieck also tallied in the victory. The Surf shared a point with Arsenal FC on Sunday, a 3-3 draw. Mariah Diaz Glenn, Sheridan Lanz and Raven Sweeney provided the offense for Arsenal.

Mustang SC held serve against a pair of visiting Pacific Northwest clubs. Maya Lopez and Maya Nielan provided a goal each in a 2-1 win against Washington Premier. Nielan notched a goal in the Sunday game as well, a 1-0 win over Crossfire.

Meghan McCool scored twice, Sidonie Warnecker provided a goal and two assists as Penn Fusion SA defeated SoccerPlus Elite 3-1. The Fusion also drew 1-1 in its other game of the weekend against Connecticut FC, as McCool was on the score sheet once again.

Slammers FC picked up a pair of wins: Carly Malatskey and Alyssa Rocha scored to beat San Diego Surf, while also topping Strikers FC 3-0. Malatskey had a hand in all the goals on Sunday with a brace plus an assist, with Julia Bingham accounting for the third goal.

It was a six-pack of goal scorers on Saturday for Santa Rosa United, as Madison Gonzalez, Megan Moore, Savannah Stoughton, Bria Varnbuhler, Taylor Ziemer and Miranda Gonzalez all found the back of the net in a 6-2 victory over Pleasanton Rage.

Texas recruit Haley Berg scored both goals to lead the Dallas Texans to a 2-1 defeat of Texas Rush. Kynnedi Sonnier tallied the consolation for the Rush. Berg changed to provider on Sunday, as she had two assists in a 4-0 victory against Challenge SC, as Hope Hyde had a hat trick and Ravyn Hoelscher scored the fourth goal of the day.

FC Bucks scored three goals unanswered with a pair of wins in its two games late. Gabrielle Farrell and Julia Panko provided the offense in a 2-0 victory against Connecticut FC, while Shannon Burns scored the winner in a 1-0 win over SoccerPlus Elite.

Victoria Kiana and Jessica Landas each scored for the Pleasanton Rages, which eked out a 2-1 victory against Santa Rosa United. Mariah Meza accounted for Santa Rosa’s goal.

Washington Premier performed well on a road trip to Northern California. It started off with a 2-0 win against Mustang SC, with goals coming from Elizabeth Griffith and Jennifer Oak. McKenna Ferrera scored a brace, while Griffith, Kelcie Hedge and Morgan Weaver scored in a 5-0 defeat of De Anza Force.

It was a weekend of 1-0 wins for Bethesda SC, which beat a pair of visitors by the same score line. Forward Rachel Alexander scored to beat Internationals SC on Saturday, and defender Hannah Menard notched the winner against Ohio Premier on Sunday.

PDA swept its pair of weekend matches, defeating Scorpions SC 4-2 and holding on for a 1-0 win against FC Stars of Massachusetts.

Colby Ciarrocca boosted her goal total to 12 from 12 games this season with a hat trick in a 7-0 win against Scorpions SC. Rachel Corboz had four assists, while Lauren Dimes scored twice and Sabrina Flores and Katelyn Walters added a goal each. Ciarrocca scored again on Sunday, while Flores had a hat trick in a 5-1 defeat of FC Stars of Massachusetts.

Kyra Carusa scored twice and assisted on a Pilar Torres goal as the San Diego Surf beat Slammers FC 3-1. On Sunday, Jessica Morales was the two-goal performer against Arsenal FC, as the Surf won 3-0. Torres also tallied in that game.

Connecticut FC secured a pair of identical 4-0 results, topping both FC Bucks and Penn Fusion in its wins.