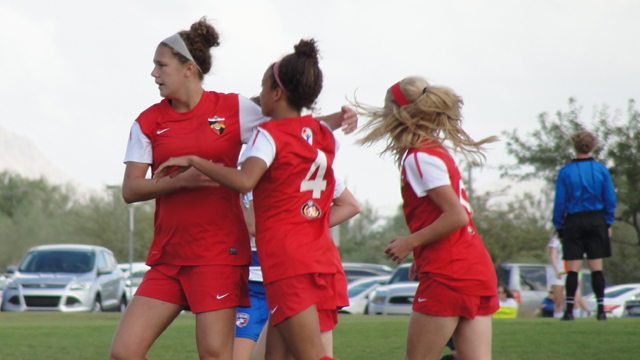 PHOENIX – The first ECNL National Event concluded its second day on Saturday at Reach 11 Sports Complex. There were a number of notable games on the day; below is a few that TopDrawerSoccer.com attended.

Click here to read: Recap of Day 1 or Standouts from Day 1. 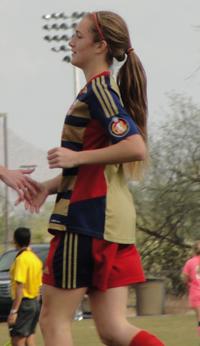 In a wild, entertaining game, FC Dallas and Real Colorado combined for seven goals in the opening half before the teams battled to a scoreless second half.

Tatum Barton started the scoring early when she beat the offside trap of FC Dallas in the second minute and slotted the ball home for the opener. It was the 12th goal of the season for the Texas Tech commit.

FC Dallas answered 13 minutes later when Natalee Heiser linked up with Abby-Grace Cooper for a quick give-and-go. Heiser was the one to get the final touch and put it into the back of the net.

Cydney Billups gave Real Colorado the lead again ten minutes later. Mallory Pugh started the move with a wonderful piece of skill that showed off the U.S. U17 Women’s National Team forward’s prowess on the ball. Pugh was denied a clean look on goal thanks to a sliding challenge from Valiree Morris. Billups picked up the ball following the challenge and fired it into the net.

FC Dallas answered nearly immediately when Heiser volleyed home a free kick from Addison McCain. The free kick from 40 yards out drifted to the far post where Heiser fought off her mark and smashed it into the net for her second of the game and to put the teams back on level terms at 2-2.

Once again, Real Colorado took hold the lead with only a couple of minutes left in the first half. It was Billups again with the perfectly placed shot for her second goal of the game. Allison Gray whipped in a cross that Billups headed off the post and into the net.

McCain found the answer for FC Dallas a minute later when she hit a rocket of a shot from outside the box that hit the upper corner of the net. McCain’s screamer was unstoppable and looked to be the last goal of the first half.

However, Real Colorado nabbed the game-winner in stoppage time of the first half when Pugh slipped Bailey Cook in on goal where she beat the keeper for Real Colorado’s fourth goal of the game.

The two squads battled through the second half, but neither could find another goal and the final score ended 4-3 in favor of Real Colorado.

Dallas Sting improved to 2-0-0 at the event with a victory over Illinois club Eclipse Select on Saturday morning. Cyera Hintzen scored the lone goal off of an assist from Stefani Doyle after Hintzen stole the ball following some hard work on the defensive side of the ball. Hintzen played the ball off to Doyle who gave it back to the speedy forward. Hintzen finished it to give Sting the lead in the 15th minute.

Six minutes later, Sting had a good chance to double the lead when Doyle broke free down the left side. The attacking midfielder’s shot clanged off the crossbar.

Sting had another look at a second goal with six minutes left in the half when defender Ashleigh Lyons whipped in a cross to the far post. Kristen Racz put her head on the cross, but her shot went wide of the far post.

Eclipse took control of the game early in the second half, but the Sting defense always seemed to be in the right spot.

Zoe Redei set up a goal scoring chance early in the second half when she hit a cross for Marissa Bosco, but Sting defender Kristen Siragusa blocked the shot.

Doyle hit the metal again in the second half when she broke through the Eclipse defense on the dribble, but her effort collided with the post this time.

Eclipse kept the pressure on in search of the equalizer and had two good looks in the dying moments, but Sting goalkeeper Justice Stanford made two very good saves to preserve the shutout.

It was a track meet from the opening whistle in the U15 fixture between TSC Hurricane and Pleasanton Rage, and TSC Hurricane was definitely the faster side.

Parker Goins raced past the defense in the seventh minute for the opening goal. She waited 10 minutes before she pulled off the same move for her second goal of the game.

With a two-goal lead, TSC continued to keep the pressure on Rage. Taylor Malham netted the third goal of the game with a long bomb that sailed over the keeper and into the net.

Malham also scored the opening goal of the second half. For her second goal, she dribbled through the defense and then slotted it around the keeper.

One minute later, Goins completed her hat trick when she directed a cross from Nayeli Perez into the net.

Rage answered with a goal of its own in the second half thanks to a free kick tally from Ariana Nino, which was her third goal of the season.

Hurricane’s Emma Foster claimed the final goal of the game with a shot from just outside the box that went over the goalkeeper and into the net.

TSC Hurricane ends the event with a game against Slammers FC on Sunday.