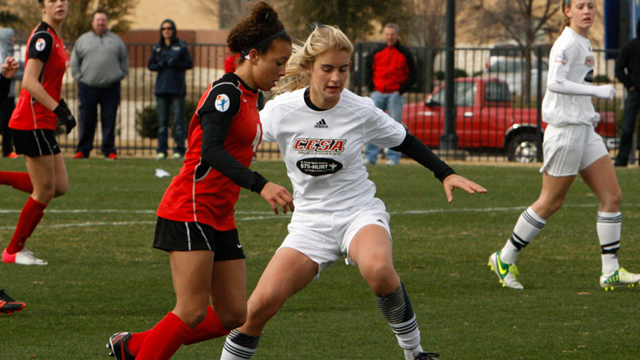 The comfort of home surely didn’t hurt FC Dallas at this age group, which managed to pick up three wins in the three days of the Showcase. Brianna Ellerbe supplied the perfect start, as her hat trick helped FCD to a 4-3 win against St. Louis Scott Gallagher. Maci Schoonover grabbed the only goal of the game in a 1-0 defeat of Heat FC. FCD wrapped up the weekend with a 2-0 win over Sereno SC. 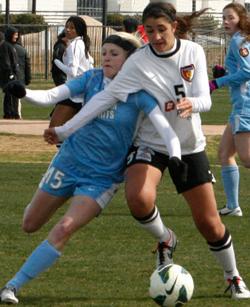 It was predominately Texas-based teams to make the trip to Frisco, and the Dallas Sting was another U14 side that picked up three wins, defeating Las Vegas Premier 3-0, beating Challenge SC 1-0 and finishing off the weekend with a narrow 3-2 win against Vardar.

Strong defensive performances from Paige Dobbs, Katrina Kooman and Leah Moss led the Michigan Hawks to a 2-0-1 record, winning 1-0 over Crossfire Premier and 2-1 over the Colorado Rush after opening the weekend with a 2-2 draw against the Texas Rush.

Rising star Mia Hoen-Beck lived up to her reputation as one of the best goal scorers in this age group, accounting for four of McLean Youth Soccer’s six goals over the weekend. She tallied once as her side defeated FC Dallas 2-0, notched a brace in a 2-1 win against Sporting Blue Valley, and was in on the scoring again, tallying in a 2-1 defeat of St. Louis Scott Gallagher.

Finishing off its first ECNL season at the Frisco Showcase, Orlando City YS finished the weekend with a win and two draws. After a rather tame 1-1 draw, Orlando drew 4-4 in a wild encounter with Albion Hurricane FC, finishing the season and the weekend off with a 3-0 defeat of San Juan SC.

Lonestar SC found itself in a trio of hard-fought and close matches, beating Carmel United 2-1 – in a rematch of a 2011 national final – squeaking past Freestate Soccer Alliance 1-0 and drawing 1-1 with Sockers FC. Mikaela Harvey, Christyna Pitre and Katherine Uhler helped lead the way for the U17s.

Three wins in three games was a positive return for the Michigan Hawks. Jamie Cheslik guided them to a 2-0 defeat of Bethesda SC to open the weekend, while Rilka Noel and Marisa Oleksiak notched goals and put in strong performances as the Hawks won 2-0 against CASL Chelsea. Michigan closed out the trip with another 2-0 win, this against the Atlanta Fire.

FC Virginia returned home from Frisco with a win, draw and loss. After dropping a tough 1-0 result against a potent Carolina Elite Soccer Academy side, FCV drew 1-1 against the Minnesota Thunder (Natalie Perussault scoring Virginia’s goal), and finished off with a 2-0 win against TSC Hurricanes.

Penn State-bound forward Elizabeth Ball continued to prove her scoring dominance, scoring in all three games for the Richmond Strikers, as her side finished with two wins and a loss. Ball scored in a 2-1 loss against Solar Chelsea, and also notched goals in 2-1 wins over Orlando City and Las Vegas Premier.

It was an undefeated weekend for the Colorado Rush, picking up two wins and a draw. The Rush opened things up with a 4-0 win against Lonestar, with Morgan Stanton netting a brace and Rachael Collins and Hailey Devries accounting for the goals. Former U17 WNT defender Gabbi Miranda scored the winner in Rush’s second game, a 1-0 defeat of Dallas Sting, before wrapping things up with a 0-0 draw against D’Feeters SC.

The offensive performance of TSC Hurricanes was one of the biggest standouts of the weekend. In three wins, the Tulsa-based club scored 17 goals, rolling past Internationals 8-2, beating VSI West FL Flames 6-0 and finishing things off with a 3-0 win over Orlando City.

The Michigan Hawks managed to deal the Dallas Texans a rare loss on the year, winning Saturday’s encounter 2-0. However, the Texans, who have lost just one game in conference play all year, picked up wins against San Juan SC (4-1) and Crossfire Premier (2-1) to sandwich the defeat.