ECNL Recap: Getting Ready for Phoenix 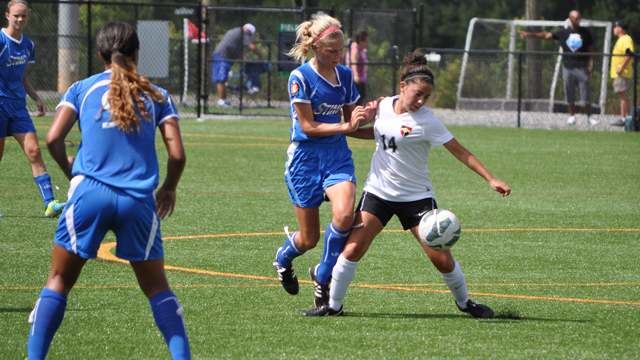 Real Colorado beat Colorado Storm 1-0 on Saturday in a battle of the top two teams in the Heartland Division. Sophia Smith scored the lone goal off an assist from Haley Archuleta and Lillian Rawnsley logged the shut out in goal.

Santa Rosa United improved to 4-1 on the season in conference with a 1-0 win over Pleasanton Rage on Saturday. Jordan Girman scored the lone goal, her first of the season.

So Cal Blues remained undefeated on the season with a pair of road wins over the weekend. Blues beat Sereno Soccer Club 2-1 on Saturday in Tempe behind goals from Isabella Bellinghausen and Ashley Sanchez. Olivia LaCasto had the assist. Nadya Crable had the lone goal for Sereno. LaCasto capped the weekend with the game-winner on Sunday in a 1-0 victory against SC Del Sol.

Sporting Blue Valley won its final tune-up before the Phoenix Showcase. Sporting beat SLSG 2-1 on Sunday in a Heartland Division showdown. Macy Trujillo led the way with a goal and an assist for Sporting. Haley Freeman netted the other goal. Shelby Christopherson provided an assist.

Sockers FC topped Eclipse Select Soccer Club 3-0 in the battle of Illinois on Sunday. The win marked the fourth straight victory for Sockers FC, which has outscored their opponents 12-1 during the run.

Brittany Reyes scored a hat trick and Slammers FC cruised to a 7-0 win over Las Vegas Premier on Saturday. Hailey Stenberg and Carly Malatskey both had a goal and an assist on the day. Alyssa Carthan and Kaylin Walzinger each had a goal as well to round out the scoring. Malatskey did the heavy lifting on Sunday scoring all three goals for Slammers in a 3-0 win over Heat FC. Danielle Thomas provided the assist on one goal.

Real Colorado extended its lead in the Heartland Division with a 2-0 win over Colorado Storm on Saturday. Tatum Barton and Kylee Duren each scored a goal for Real in the win. Real Colorado is 10-1-3 on the season, and has spent much of the year playing without star Mallory Pugh, who has been with the U17 Women’s National Team recently.

Utah Avalanche started the season with a pair of wins over FC Nova. Amber Tripp scored twice on Saturday in a 3-1 win over FC Nova. Holly Daugirda had the other goal with Taylor Kasteler and Kara Morgan dishing out the assists on the day.

Lonestar SC and TSC Hurricane battled to a 1-1 draw on Sunday in Texas Conference action. Sophia Acevedo scored the lone goal for Lonestar, which sits in third place in the conference.

In other Texas Conference games, AHFC defeated FC Dallas 1-0 behind a goal from Shannon Flowers. AHFC is fifth in the conference with a 3-1-4 record heading into the first National Event of the season.

In the oldest age group, it was a battle between Lonestar SC and TSC Hurricane again. The Texas Conference clubs played to a 3-3 draw. Anna Beffer scored all three goals for the Tulsa side. Beffer has nine goals and eight assists in 11 games this season.