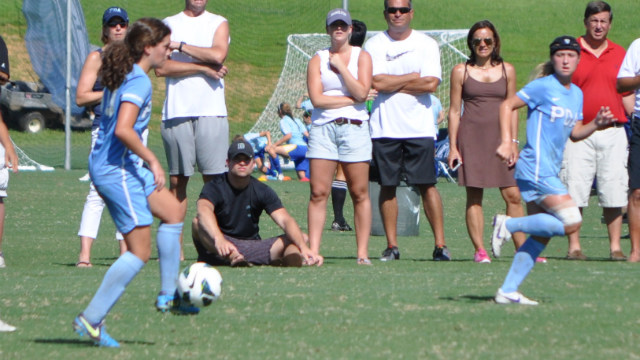 Mia Brascia provided a goal and an assist as Heat FC edged SC Del Sol 2-1. Amber Vokun also scored for the Heat, which also won its other game of the weekend, 1-0 over Sereno SC. Morgan Lovato scored the winner in that one.

So Cal Blues secured a pair of positive results over the weekend. On Saturday, they topped Strikers FC 3-0, and followed that up with a 4-0 win against Arsenal FC on Sunday.

Las Vegas Premier spilt a pair of matches on its trip to Arizona. After a 2-1 defeat of Sereno SC, Las Vegas dropped its second match of the weekend, 4-1 against SC Del Sol.

Heading to Richmond as part of the Jefferson Cup girls weekend, a handful of games took place in the mid-Atlantic region. Bethesda SC found a way past Virginia Rush SC, as Nicole Bautista’s goal and assist helped the D.C. area side to a 2-1 win. Jamie Fink also grabbed a goal in the win. Bethesda also won on Sunday, topping Richmond Strikers 3-1, with goals coming from Fink, Olivia Kane and Cameron Murtha.

Lauryn Payne nabbed the decisive tally on an assist from Aleenah Perez, as Arsenal FC edged So Cal Blues.

Two goals from Cameryn Burke powered Maryland United FC to a 4-0 win against the Richmond Strikers. Kailey Campbell and Maria Gentile also found the back of the net. Maryland also topped Virginia Rush 2-1 over the weekend.

Olivia Hernandez’s brace paved the way for Sereno SC’s 4-0 defeat of visiting Las Vegas Premier on Sunday. Gina Bracamonte also scored and added two assists, while Sophia Struckman rounded out the scoring on the day. On Sunday, midfielder Ashley Dahl scored both goals as Sereno made it two wins from the weekend, defeating Heat FC 2-1.

There was a glut of goals for the So Cal Blues on Saturday, which beat Strikers FC 6-1. Marissa Everett netted her first of two consecutive hat tricks, and UCLA recruit Anika Rodriguez rounded out the scoring. They were far from done, however, as So Cal followed that up with a 9-1 defeat of Arsenal FC on Sunday.

Part of the trip to Arizona, Heat FC split its two-game swing. After snagging a 2-0 defeat of SC del Sol on Saturday, the Nevada side dropped Sunday’s match 1-0 against Sereno SC.

A goal and an assist from Georgetown-bound Rachel Corboz helped PDA secure a 3-0 win against World Class FC. Lauren Jankowski and Alexandra Weyrauch also found the back of the net for the Jersey side.

Future Penn State forward Elizabeth Ball scored and set up the second goal as Richmond Strikers beat Maryland United FC 2-1 on Saturday. Kayla Blake scored the other goal in the victory for the Strikers.