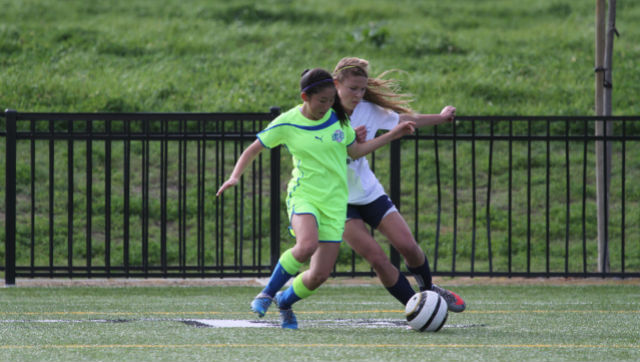 West Coast FC’s Kaitlin Collins and Mia Roth accounted for the offense as they topped SC Del Sol 2-0. Kailey Smith setup both goals in the win. In their other game of the weekend, West Coast drew 0-0 with Sereno SC.

After opening the weekend with a 1-1 draw against Challenge SC, Tamier Grosvenor and Amber Lyons scored as Dallas Sting topped Texas Rush 2-1 in a win on Sunday.

It was a successful swing south for Washington Premier over the weekend. First, goals from Leahi Manthei and Camille Murphy drove the squad to a narrow 2-1 win against FC Nova. Jenna Killman scored a hat trick in a 3-0 Sunday win over the Utah Avalanche.

A trio of goals from Eve Hewins pushed Scorpions SC to a 5-0 win against SoccerPlus Elite. Rachel Boule and Elizabeth Weimer also scored, while Kristen Franzini had a hat trick of assists. Scorpions lost 4-0 in their other game of the weekend against Connecticut FC.

West Coast FC put together a clean weekend, picking up two wins with two shutouts. First, a goal from Sophia Serafin was all that they needed in a 1-0 victory against SC Del Sol, while Serafin scored twice on Sunday in a 2-0 defeat against Sereno SC.

On the strength of goals from Lauren Markwith and Hannah Stammer, So Cal Clues SC edged Sereno 2-1. Markwith and Stammer were at it again, tallying in a 2-0 win over SC Del Sol on Sunday.

A goal from Shelby Roberts helped Sereno SC edge So Cal Blues SC 1-0. The Arizona side couldn’t make it two wins in two – a pair of goals from West Coast FC’s Laura Buck, along with a Leah Pruitt strike saw the California side win 3-2 on Sunday. Allison Raniere and Natalie Stephens provided Sereno’s consolation goals.

Sweeping past its Texas rivals over the weekend, D’Feeters began the two-day slate with a 2-0 defeat of Texas Rush, as Morgan Middleton and Megan Uhr accounted for the goals. Middleton scored again, while Lauryn Bruffet also tallied in a 2-0 defeat of Challenge SC.

Eclipse Select and Michigan Hawks played each other twice over the weekend. After a 0-0 draw on Saturday, Eclipse SC picked up the full points with a 2-0 victory on Sunday.