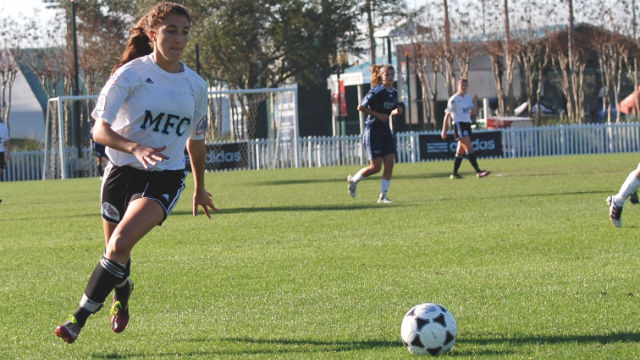 Goals from Kayla Cannon, Allison Cook and Lauren McCaffrey powered West Coast FC to a 3-0 defeat against Las Vegas Premier. It was a busy weekend for the California side, which also visited Heat FC, securing three points there as well, 1-0. Kailey Smith notched the decisive tally in that one.

Carmel United edged a close encounter against Ohio Premier, winning 2-1 in a conference clash. Grace Todd and Jessica Cowen each scored, while Cassidy Lindley picked up an assist in the win. 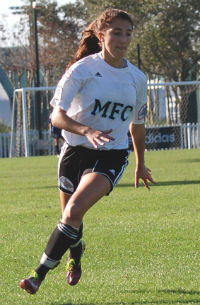 Bethesda SC picked up a win over the weekend, topping Ohio Elite Soccer Academy 5-2. Cameron Murtha’s ha trick led the way, while Natalie Gately scored and added two assists. Nicole Bautista rounded out the scoring for Bethesda, while Chloe Kosik and Abby McNamara provided the offense for the Ohio club. Bethesda also picked up three points with a 2-0 win against Carmel United over the weekend.

Maryland United FC and Carmel United shared a point on Saturday, drawing 2-2. Cameryn Burke and Kori Locksley were able to cancel out a brace from Carmel’s Alexandra Rice.

Alexandra Hoffman setup two goals on the way to a 3-1 victory for Internationals SC against in state opponents Ohio Premier. Evelyn Lavelle, Kelsey Matyi and Hannah Nichols provided the goals for Internationals.

Arsenal FC tied Real So Cal FC. With the score tied 0-0 at the half, five minutes after the break, Arsenal went up 1-0 on a goal from forward Lauryn Payne.

With less than  two minutes left in the game Real So Cal striker Veronica Merrill scored to tie the game 1-1.

Two goals from Summer Mason was all that So Cal Blues needed, edging Heat FC 2-1 on Sunday. The win came after the Blues battled Las Vegas Premier to a 0-0 draw the day before.

Maryland United put together an impressive two-game stretch, scoring 11 goals and keeping two shutouts against Carmel United and Ohio Elite Soccer Academy. Three goals from Kia Rankin and two from Gabrielle Vincent guided Maryland to an 8-0 win over Carmel, and that was followed up by a 3-0 defeat of Ohio Elite on Sunday.

It was a promising road trip for Ohio Elite Soccer Academy, picking up a pair of quality results against Bethesda SC and Maryland United, winning 4-0 and 3-0 respectively.

It was a goal-scoring spree for Dallas Sting, blanking Albion Hurricanes FC 8-0. Mimi Asom put in two and added an assist, while Taylor Cobb, Jordan Harr, Julie James and Gwenyth Puente all found the back of the net.

Two strong performances from West Coast FC saw them blank Las Vegas Premier 7-0, and following that performance up with a 2-0 defeat of Heat FC during a road trip to Nevada.

Sidney LeRoy’s goal for D’Feeters was the only scoring on the day, as they found a way past FC Dallas 1-0. Danielle Murphy provided the helper on the decisive goal.

Ohio Elite picked up two wins on its trip to Maryland, beating Bethesda SC 2-0, and snagging full points with a 3-2 win against Maryland United.

After suffering a 3-1 defeat on Friday to Las Vegas Premier, West Coast FC bounced back with a 6-1 victory over Heat FC to wrap up a two-game stretch in Nevada. Brittany Mueller scored a brace, while Nicole Faris and Natalie Higgins each scored and assisted for West Coast in the win. Charlotte Brascia provided Heat’s consolation goal.