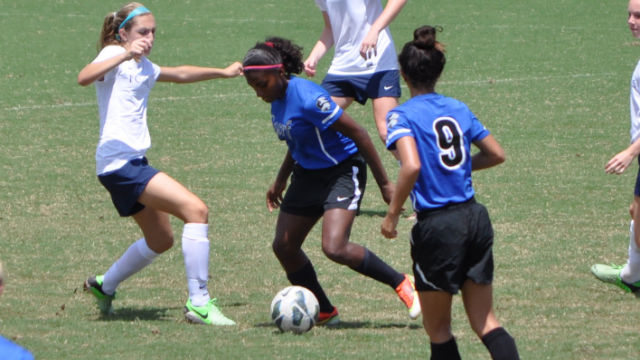 PDA put together a strong weekend against local rivals. Amelia Paternoster scored twice on the way to a 4-0 victory over Match Fit Academy – Jillian Wachira notching a pair of assists as well – while Jessica Schildkraut scored twice and assisted in a 3-0 victory against Continental FC Delco on Sunday.

A goal and an assist from Kayla Lanza proved decisive as Connecticut FC topped East Meadow SC 2-1. On Sunday, CFC secured an unbeaten weekend, matching Albertson SC in a 2-2 draw. 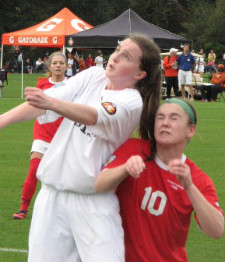 A hat trick from Michigan Hawks forward Alexa Spaanstra provided the bulk of the scoring as the Hawks beat Eclipse Select 5-1 on Sunday. This came after the Michigan side opened the weekend with a 0-0 draw on Saturday against Sockers FC.

FC Stars of Massachusetts took on the FC Bucks and came away with a 3-1 win in the rain on Saturday. Kiley Larocque and Jenna Barnes scored for the Stars in the first half, but a tally by Danielle Meenan of the Bucks closed the gap early in the second. Late in the game, Stars forward Gabrielle Brummett found the back of the net to secure the result. Sunday’s match against Penn Fusion saw Stars attacker Hannah Reiter put them up 1-0 on a strike from 25 yards out. Cashlin Copley countered shortly thereafter for Penn Fusion to tie things up. Brummett scored for the Stars to put them back ahead, and with the rain picking up and time winding down, Stars keeper Amanda Fay stuffed a Penn Fusion breakaway. Not to be denied though, Copley scored her second goal in stoppage time to give Penn Fusion a 2-2 tie.

Catarina Macario, Taylor Kornieck and Jordyn DiCintio each scored in the San Diego Surf’s 3-1 win against Real So Cal on Saturday. Macario and Kornieck also found the back of the net in the team’s 4-1 victory the following day.

Reigning ECNL champions De Anza Force maintained its high-scoring form playing for the first time since November, grabbing two 7-0 wins against Utah Avalanche and FC Nova respectively. Forward Kayla Fong bagged a hat trick in the first win, and followed that up with a four-goal performance on Sunday.

Natalee Heiser netted the game’s only goal, guiding FC Dallas to a 1-0 win against local rivals Solar Chelsea SC. FCD sits in first place in the U16 Texas Conference.

It was a solid showing from Mustang SC, which scored seven unanswered goals from its two games over the weekend. Morgan McGarra, Madison McNamara and Rachel Speros scored in a 3-0 defeat of FC Nova. On Sunday, Brooke Cilley score twice and assisted in a 4-0 victory against Utah Avalanche.

Erin Gilroy’s hat trick was all the scoring East Meadow Soccer Club would need, as the New Jersey side defeated Connecticut FC 3-1 on Saturday. Gilroy also netted a brace as East Meadow made it two wins from two games, a 2-1 victory against SoccerPlus Elite.

Matchfit Academy beat rivals PDA 3-0 Saturday in the first ever ECNL meeting between the two New Jersey powers. The pace of Virginia commit Hana Kerner helped open the scoring, as she finished from close range to open up a 1-0 lead. Kayla Jennings (Maryland) and Holly Confalone (Boston College) scored the other two Matchfit goals on the day.

PDA midfield Rachel Corboz was in the thick of a pair of PDA victories once again. The Georgetown-bound midfielder scored and assisted in a 3-0 win against Match Fit Academy – Colby Ciarrocca and Katelyn Walters also getting in on the scoring action. Lauren Jankowski and Lauren Dimes then both scored in a 2-0 defeat of Continental FC Delco.

U.S. U18 WNT’s Emily Ogle played a significant role in a 4-0 win for Internationals SC. Ogle scored twice in a win against Bethesda SC, while Logan Harvey and Victoria Martinis also scored.