ECNL Recap: Out with the old, in with new 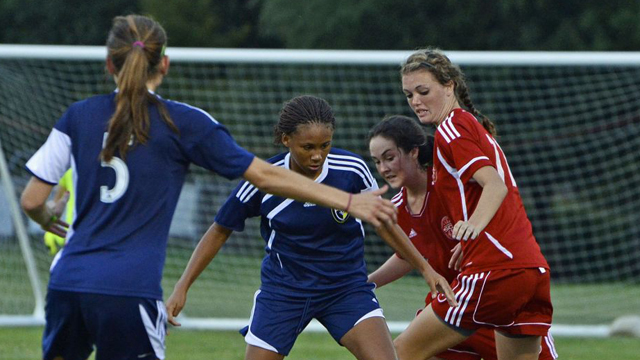 Timing is everything in soccer.

In the Elite Clubs National League (ECNL), this week was a matter of scheduling as some teams entered Saturday for their first games of the season while others had already played a dozen or so games and were heading into a break for high school soccer.

Check out how some of the teams fared in this week’s recap below and the scores from all games on the TopDrawerSoccer.com Club Scoreboard.

Internationals (Ohio) had an enjoyable weekend with six points collected from two games. On Saturday, Internationals shut out Virginia Rush 2-0 with Kelsey Matyi and Alexandra Hoffman finding the back of the net. The next day, Internationals cruised past Richmond Strikers 4-0 behind Matyi’s two-goal, one assist performance. The 13-year-old leads the team in points scored with 15 in her first 10 games.

Solar-Chelsea Soccer Club held onto the top spot in the Texas Conference with a 2-0 win over D’Feeters Soccer Club on Sunday. Adrianna Jimmerson and Hannah Webb notched the goals in the victory. 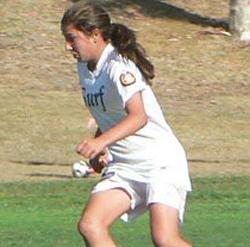 Out West, San Diego Surf continues to climb the standings in the SoCal Conference thanks to the play of striker Catarina Macario. The 12-year-old Brazilian has 14 goals and three assists in the seven games that she has played this season. Over the weekend, she had a goal and an assists in a 3-0 win over So Cal Blues. But West Coast FC continues to hold onto the top spot in the conference after a 2-0 win over Arsenal. Sophia Serafin notched her 15th goal of the campaign in the win. Holly Kaemerle added a goal and an assist on the day.

Sporting Blue Valley opened up some space at the top of the Midwest Conference Standings over the weekend with a pair of victories. On Saturday, Sporting defeated Michigan Hawks 2-0 thanks to goals from Morgan Hensley and Grace Kitts. Sporting completed the sweep of the Michigan teams on Sunday with a 1-0 win over Vardar. Midfielder Alyssa Seitzer nabbed the game-winning goal in that clash.

Allison Gray’s fifth and sixth goals of the season were enough for Charlotte Soccer Academy to defeat Orlando City YS on Saturday 2-0. Charlotte remains behind Concorde Fire in the Southeast Conference after the Atlanta club also won on Saturday. Lily Ammon, Brook Colangelo, and Gabriela Rivera all found the back of the net in a 3-0 win for the Fire.

San Diego Surf goes into the break for high school with a comfortable lead at the top of the SoCal Conference. Surf is 6-0-0 in conference play after a wild 5-2 victory over So Cal Blues on Saturday. Attacking midfielder Olivia Erlbeck had two goals and two assists to help Surf capture all three points.

Washington Premier started its season on the right foot on Saturday with a 3-0 win over Santa Rosa. Jordyn Bartelson, Arin Seidlitz, and Morgan Weaver all scored in the shutout victory. Premier now has three weeks off before it heads to Florida for the next ECNL Showcase.

Orlando City’s Ruvimbo Mucherera and Alana Hockenhull continued their hot start to the season with both finding the back of the net on Saturday in a 2-1 victory over Charlotte Soccer Academy. Mucherera and Hockenhull both have scored nine goals this season, as Orlando City sits in first place in the Southeast Conference.

The race at the top of the SoCal Conference is still close heading into the high school break after West Coast FC, So Cal Blues, and Slammers FC all recorded victories on Saturday. Miranda Stiver scored twice for Slammers in a 4-0 win over Real So Cal. Sydney Magnin and Anika Rodriguez found the back of the net for the Blues in a 2-0 win over San Diego Surf. The conference leaders West Coast FC used two goals from Aubrielle Camacho and a goal and two assists from Christina Settles to defeat Arsenal 3-0.

The top two teams in the Midwest Conference squared off on Saturday when Sporting Blue Valley hosted Michigan Hawks, which resulted in a 1-1 draw. Arkansas Abigail Sieperda scored the lone goal for Sporting thanks to an assist from Nebraska commit Haley Hanson.

South Florida commit Marissa Milazzo had two goals and an assist in a 4-0 victory for Internationals SC over Virginia Rush on Saturday. The future USF forward also helped Internationals to a 2-1 victory over Richmond Strikers on Sunday. The Ohio club sits at the top of the Midatlantic Conference with a perfect 4-0-0 record.

In the first game of the season for both teams, East Meadow Soccer Club topped Albertson Fury 2-1 on the road on Sunday. Colleen McCormack had both assists on the goals by Alexa Schneider and Laura Gomez for East Meadow.

While North Carolina was winning its 21st NCAA Championship on Sunday, 2013 commit Cameron Castleberry was busy scoring a hat trick for CASL Chelsea Ladies in an 11-0 win against VSI West FL Flames. The rich only get richer in women’s college soccer.