There is only one more weekend left in the regular season for ECNL, as the elite girls club soccer league quickly churns toward postseason festivities. The final days of the season offer smaller slate of games with only a few conferences taking part in this weekend’s schedule.

There was still plenty on the line for those that were in action including conference crowns and wild card spots.

FC Dallas notched its 12th win of the season over the weekend with a 4-2 victory over Texas Rush. Sophia Fondren helped spur on the attack with two assists to her name. Abby-Grace Copper, Addison McCain, Morcquess Oliphant, and Sky Reynolds each scored a goal for the second place team in the Texas Conference.

Colorado Storm wrapped up the Mountain West Conference title over the weekend with a 2-1 win over Real Colorado. Elisabeth Geraghty scored the opener off an assist from Allison Schlegel. Gabriella McWilliams doubled the lead when she connected on a corner kick from Madeline Alhamra. Storm will be one of the 16 teams in the national finals, which takes place in July in Richmond, Virginia.

Richmond Strikers wrapped up its season with a pair of victories over Virginia Rush Soccer Club over the weekend. Strikers claimed a 5-0 win in the opening game on Saturday, and then completed the sweep with a 2-1 win on Sunday. 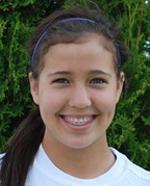 Amy Mandia scored two goals and added an assist to help FC Bucks top FC Delco 5-1 on Saturday in Northeast Conference action. Mandia only had one goal in her previous 19 games this season in ECNL play. Gabrielle Farrell, Katelyn Long, and Emma Loving also scored for the winning side. Paige Jones notched the lone goal for Delco.

Ohio Premier Eagles defeated Carmel United and Ohio Elite Soccer Academy by 2-1 and 3-1 score lines, respectively, over the weekend. The Eagles jumped past FC Virginia, which lost one game over the weekend, and moved into second place in the Midatlantic Conference.

Washington Premier captured the Northwest Conference title on Friday with a 1-0 win over Crossfire Premier. Jennifer Oak scored the lone goal off an assist from Morgan Weaver. Washington Premier concluded the regular season with only four goals conceded in 14 conference games.

Gwinnett Soccer Association moved into a tie for first place in the Southeast Conference with a 5-2 win over Atlanta Fire on Saturday. U.S. U17 Women’s National Team forward Jennifer Westendorf recorded a hat trick to push her season tally to 29 goals in 24 games. Amanda Vocelka had a goal and two assists from the final regular season game for GSA.

Internationals SC ended the weekend with four points, which was enough to keep the Ohio club at the top of the wild card standings heading into the post season. Internationals played to a 1-1 draw against Ohio Elite Soccer Academy on Saturday. Alyssa Baumbick scored the lone goal for Internationals and also added a second goal to her weekend tally on Sunday in a 2-0 win over Carmel United. Zoe McCormick also had a goal for Internationals in the shutout victory.

Connecticut FC moved a step closer to wrapping up second place in the Northeast Conference with a win over SoccerPlus Elite Connecticut FC on Saturday. CFC needs a victory against East Meadow Soccer Club this Saturday to keep hold of the spot following its final regular season game.