PHOENIX – The first ECNL National Event of the 2013-14 season wrapped up on Sunday at the Reach 11 Sports Complex. The three-day competition tested teams at every step, but the final day was the biggest hurdler with quality squads showing off the depth that allowed them to circumnavigate the extended weekend in Arizona.

Below is a recap of a couple of games from Sunday. Check out recaps from Day One and Day Two as well as standout players from the first day and second day. 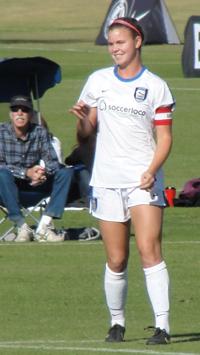 A goal and an assistant from Elisabeth Geraghty was enough for Colorado Storm to defeat West Coast FC in the opening game on Sunday from Field No. 5. The youth national team forward scored the opener in the first half when Aimee Thorstensen released her in on goal with a well-timed pass. The striker curled her shot around the keeper for the first goal of the game.

With West Coast FC pushing for an equalizer in the second half, Storm caught them on the counter-attack. Geraghty linked up with Cameron Bell who slipped her shot under the keeper and into the net to double the lead.

West Coast kept hammering the Storm goal though in hope of getting on the board and pushing for a draw. Center back Marissa Cordero found the goal for West Coast when she knocked a corner kick into the empty net after Storm goalkeeper Caitlin McPherson was caught in the traffic in front of the goal.

With only a few minutes remaining, West Coast kept pushing for the game-tying goal, but McPherson came up a couple of saves to hold onto the lead and see out the three points against the talented team from Southern California.

The loss was the first of the season for West Coast FC and only the second time that the squad had conceded more than one goal in a game.

Surf benefitted from a minor gaffe by the SLSG goalkeeper in the first half for the opening goal, and then cruised to a 3-0 win in the final game for both teams in Phoenix.

Erica Stephan scored on a free kick from over 35 yards out that slipped through the hands of the SLSG goalkeeper and nestled into the net for the opening goal.

Surf pushed for more goals in the second half and was rewarded with a tally from Dominique Diller early in the latter stanza. Cassandra Taniguchi brought down a pass near the top of the box where she laid it off for Diller who passed it into the back of the net.

Surf put the cherry on top of the day with a screamer from Amber Michel who beat her mark on the dribble before smashing her shot into the lower corner of the net.

The Surf defense had to withstand some pressure late, but SLSG never found the final touch to put the ball in the back of the net.

For a complete list of scores from the ECNL National Event in Phoenix: check here.