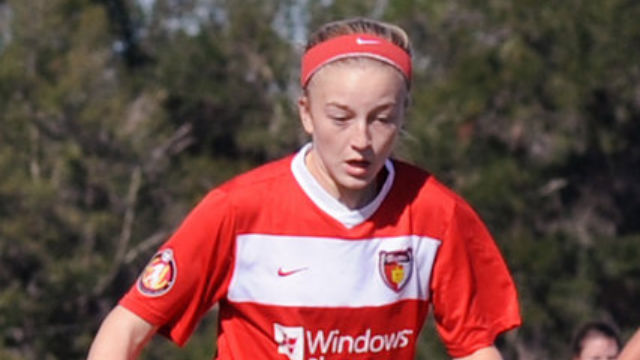 The bulk of the action at this age group took place at a U14 showcase in Indiana, as eight teams crammed in three games each over the course of Saturday and Sunday. Ohio Premier went unbeaten with a record of 2-0-1 against Sockers FC, Concorde Fire and Penn Fusion. St. Louis Scott Gallagher Illinois managed the same mark against Carmel United, Internationals SC and Ohio Elite Soccer Academy.

It wasn’t the only set of games at this age group, however, as there were U14 teams in action around the country. That included a Colorado meeting between Colorado Rush and Real Colorado. Thanks to two goals from Erin Hohnstein, and tallies from Tessa Carton, Olivia Pietro and Audrey Weiss, the Rush won 5-1.

The Dallas Sting’s Megan Nielsen accounted for the game’s only goal as the Texas club won an in state battle 1-0 against D’Feeters.

It was a pair of wins for Eclipse Select over the two-day stretch. A goal each from Jessica Christmas, Amanda DiNardo and Brynn Miller accounted for the offense in a 3-0 victory over St. Louis Scott Gallagher Missouri. On Sunday, three different players (Gabriella Cesarone, Madeline Levins, who had two, and Amanda Rapaduski) tallied in a 4-0 victory.

A two-goal performance from Messiah Bright and a third goal from Sydney Simmons helped Solar Chelsea SC on its way to a 3-1 win over Albion Hurricanes. Lauren Tovy emerged with the game’s only goal in Solar’s second win over the weekend, a 1-0 defeat of Lonestar SC.

Midfielder Luca Deza assisted on three goals, as Joelle Anderson, Kayla Fong, Emily Smith and Samantha Tran all found the back of the net in De Anza Force’s 4-0 win against Mustang SC.

The Dallas Texans put four goals past Lonestar SC, as Elle-Marie DeFrain, Alexandria Griffin, Emillie Harvey and Abigail Martinez all tallied in a 4-0 victory. Sunday saw Allisyn Gardner account for the game’s only goal as the Texans snuck past Albion Hurricane FC 1-0.

Real So Cal forward Brianna Welch scored, and it was the only goal the game would see against Strikers FC, as Real edged their Cali rivals 1-0.

K. Parker Goins setup both goals for TSC Hurriance teammates Brianna McGowan and Nayeli Perez as they eclipsed the Texas Rush by a 2-0 score.

The Dallas Texans offense was clicking over the weekend. Haley Berg scored twice and had two assists on the way to a 5-2 win against Lonestar SC, as Carina Baltrip-Reyes, Ravyn Hoelscher and Michaela Rouse also scored. The Texans followed that with a 9-1 win over Albion Hurricanes on Sunday.

Zoe Redei and Foster Ignoffo both scored as Eclipse Select topped St. Louis Scott Gallagher Missouri 2-0 on Saturday. Redei and Ignoffo scored again on Sunday, while Alissa Gorza also found the back of the net in a 3-0 win against Sporting Blue Valley.

Five different players found the back of the net for the San Diego Surf in its 7-2 win against SC Del Sol, led by a hat trick from Eva Herrera.

Summer Mason’s two goals and a tally from Machaela George provided enough offense for So Cal Blues as they beat Eagles SC 3-1.

North Carolina Fusion welcomed out of town opposition Richmond United on Saturday, and powered to a 3-0 win thanks in large part to a pair of goals from UNC Asheville commit Meredith Long. Also scoring once was Megan Krivsky, while Hannah Sink notched a pair of assists.

Goals from Madeline Barnes, McKenzi McAdams and Jordan Mulnix paved the way for FC Dallas in a 3-1 win against Texas Rush. FCD made it two wins in two days, as Mulnix scored again and Micaela Birt also struck in a 2-0 defeat of Challenge SC.

San Diego Surf put together a pair of quality performances over the weekend. First, Marley Canales, Sunny Sunphy and Hailey Rittershofer all scored in a 3-1 victory against SC Del Sol. Canales scored twice on Sunday, while Jessica Clegg and Olivia Erlbeck also scored in a 4-1 defeat of Sereno SC.