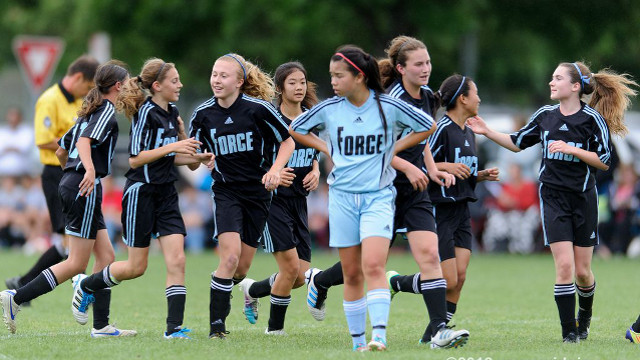 One week after the Phoenix Showcase, the action was understandably subdued in the ECNL for most age groups except the youngest. The U14 age group had two showcase events over the weekend in Rockford, Illinois and Seattle, Washington.

The Southern California club was topped on Sunday though by De Anza Force, which went 3-0-0 in Washington with wins over So Cal Blues and Slammers FC as well. 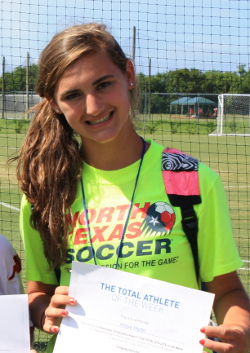 In Illinois at the Sportscore One Field, FC Dallas went 3-0-0 against Eclipse Select, Minnesota Thunder, and FC Wisconsin Eclipse. Ariel Diaz had two goals in the first two games, as she leads the team in scoring with five on the year.

Sporting Blue Valley also had a perfect record from the event. The Kansas club defeated Dallas Sting, Utah Avalanche, and Texas Rush. Alexa Hawkins had three goals in the three games including the game-winner on Sunday against Texas Rush. Garrison Galley notched the game-winning tally against Dallas Sting on Saturday.

Concorde Fire took back the top spot in the ECNL in goals scored with nine tallies against Birmingham United on Sunday. Brook Colangelo had a goal and three assists while Lily Ammon, Katie MacGinnitie, and Gabriela Rivera all scored two goals.

Dallas Sting collected two wins over the weekend behind the standout play from Lakyn Pope. The high school freshman had three goals in two games to help the Sting beat Solar-Chelsea Soccer Club 3-2 and knock off D’Feeters Soccer Club 1-0. Pope has eight goals in nine games this season to lead the Texas club.

In Northern California, Mustang SC topped MVLA 3-1 to keep the top spot in the Northwest Conference. Morgan McGarry had three assists in the game to push her season tally to five in five games. Olivia Torres scored twice in the victory.

Atlanta Fire record two wins against local rivals over the weekend. Atlanta Fire beat Concorde Fire 4-3 on Saturday. Midfielder Kristian Leone had a goal and two assists while fellow midfielder Amanda Delgado add two goals of her own. Forward Tiffany Raygor had the other goal for Atlanta.

Concorde Fire bounced back on Sunday with a 5-0 win over Birmingham United. Desiree Bowen had two goals and an assist in the lopsided victory. Bowen leads Concorde Fire in scoring with four goals on the year.

On Sunday, Atlanta Fire topped Gwinnett Soccer Association 2-1 to give GSA its second loss of the season.

Dallas Sting leads the nation in goals scores and goal differential in this early stage of the season. The Texas club has put in 25 goals so far this year while only letting in two. Over the weekend, Sting defeated Solar-Chelsea Soccer Club 4-0 and D’Feeters 2-1.

Hope Hyde, who is playing up an age group, had two goals in the shutout victory on Saturday. Taylor Cobb and Nicole Smith had the goals in Sunday’s victory.

In Northern California, MVLA topped Mustang SC 3-0 thanks to two goals from Taryn Harpell. They were the first two goals of the season for the defender. Michelle Maemone had the other tally.

Jordyn Webster notched her first two goals of the season to help Sporting Blue Valley defeat SLSG on Sunday 4-2. Webster has started every game this season at defense for the Kansas club. Savannah Trujillo and Elizabeth Luallin had the other two goals.

Michaela Abam scored her second goal of the season and AHFC got its second win of the season on Sunday in a 1-0 victory over Texas Rush. Albion Hurricane is new to the ECNL this year and struggled some to get results in the competitive Texas Conference.

On the other hand, MVLA, also new to the ECNL this season, is perfect to start the year with six wins in six games. On Sunday, MVLA topped local rivals Mustang SC 2-1 thanks to goals from Gabrielle Matulich and Zoe Pacalin. The latter leads the team in scoring with four goals on the year.

Dallas Sting closed the gap on Texas Conference leaders Dallas Texans on Sunday with a 4-0 win over D’Feeters Soccer Club. Madelyn Crabtree, Susan Dickson, Katie Martin, and Lauren Selaiden all had a goal in the shutout victory.

Gwinnett Soccer Association continues to hold the top spot in the Southeast Conference after a 1-0 win over Atlanta Fire on Sunday. Georgia commit Rachel Garcia had the lone goal – her fifth of the season.