The Elite Clubs National League (ECNL) wrapped up play in March last weekend with only a few conferences in action. The majority of the teams in the top girls club soccer league are looking forward to the next Showcase Event, which will be in San Diego starting on April 5. 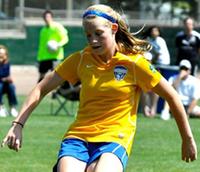 De Anza still trails Crossfire Premier in the Northwest Conference, as the Washington club is still a perfect 7-0-0 on the season after two wins over the week. Crossfire beat MVLA 1-0 on Saturday thanks to a goal from Taylor Olson. Crossfire followed that up with a 3-0 victory over Pleasanton Rage.

FC Bucks improved to 4-1-1 on the season with a pair of wins over the weekend. The Pennsylvania club defeated PDA and World Class FC on the road to keep hold of the top spot in the conference. Emma Loving and Laura Suero scored the goals in the 2-1 victory over PDA to start the weekend. Julia Panko provided one of the assist in that game. Sydney Jones scored twice in the contest on Sunday to cap off the perfect weekend. Loving added another to her season tally, which pushes her to seven goals in nine games.

Julia Pedati scored twice for Real So Cal on Saturday to secure a 2-0 win over So Cal Blues. Julia Gilliam and Hannah Sharts contributed the assists on the goals. Real So Cal remains in second place in the conference behind San Diego Surf.

World Class FC improved to 4-0-1 on the season with a pair of wins over the weekend. World Class topped FC Delco 3-0 on Saturday and then knocked off FC Bucks 1-0 on Sunday. Kelsey Davis, Caitlin Leen, and Alexandria Mesropyan all scored in the opening win. Leen added another on Sunday, which was her third of the season.

In the Northwest Conference battle, MVLA, currently top of the standings, ended the weekend with a pair of 2-2 draws against competition from Washington. U.S. U17 Women’s National Team outside back Tegan McGrady had a goal in the opener against Crossfire to push her season tally to nine goals.

PDA’s dominance was on full display in the U17 age group. The New Jersey club recorded 5-0 and 3-0 wins against FC Bucks and FC Delco, respectively. Natasha Ntone Kouo had two goals in the win on Saturday. Rachel Corboz, Schuyler DeBree, and Jessica Puchalski also scored in the victory over FC Bucks.

So Cal Blues has lost one game this season – a showcase game in September against D’Feeters Soccer Club. The other nine games have ended with seven draws and only two wins. Despite a loss in conference play, the Blues sit in fourth place and could not pick up any ground over the weekend with only a 1-1 draw against Real So Cal. Peyton Cline scored for Real So Cal while Texas A&M commit Stephanie Malherbe had the goal for Blues.

Megan Burke and Brittany Tolla scored for Connecticut FC in a 2-0 win over Albertson Fury on Sunday. Molly Moran and Jess Fontaine had the assists, as Connecticut improved to 2-0-1 on the season and sits in third place in the conference.