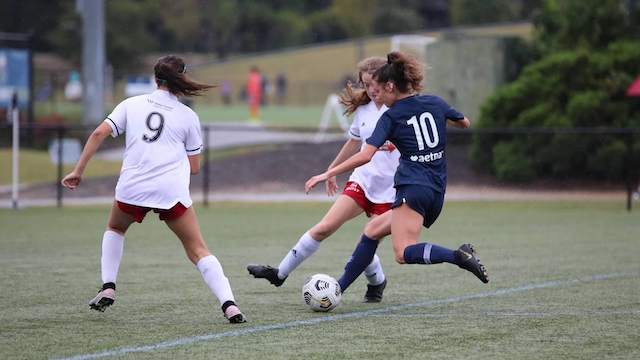 The first half of the ECNL regular season in the U17 age group has revealed some favorites from the action including one team in search of perfection from the 2020/2021 season. Check out the leaders from each conference below.

Both Michigan Hawks and SLSG Navy are 6-0-2 in the U17 age group. Hawks sits at the top of the conference thanks to a better goal differential (19 versus 12). Hawks were enjoying a stellar start to the season, but they faced a rude awakening during the Phoenix National Event with a 1-2 record. SLSG Navy had a better spell during the South Carolina event with a 2-1 record.

The New England Conference is off to a slow start at this point with only a couple of teams in action. SUSA grabbed a 6-0 win in the opening game of the season. East Meadow also won their opening game.

The North Atlantic Conference has not started conference games yet this season. PDA Blue is a perennial favorite in the conference. PDA begins conference play in March.

Real Colorado National is off to a 5-0 start in the Mountain Division in the U17 age group. Real Colorado suffered their first loss of the season during the South Carolina Showcase in December, a 0-1 loss to Concorde Fire Platinum. The team returned to action in late February.

Crossfire United is 4-0 to start the season, but the Oregon team has not played in either of the national events yet. Crossfire United scored 20 goals in the four games against local rivals. Lindsey Antonson had two goals and an assist in the last game against Portland Thorns.

Tennessee Soccer Club sits at 3-0 at this stage of the season. TSC has only let in one goal during those games. FC Pride is 2-0-1 through the opening stage of the season. Addison Chester was on fire heading into the winter break with a four-goal performance on the last weekend of games. Chloe Flinn, Abbey Iler, Isabella Griffey, and Maryn Weiger have also been standouts for FC Pride.

In a way, GSA is the defending champions in this age group. GSA won the ECNL National Championship in 2019 in the U15 age group. There was no national championship in 2020 in the U16 due to the pandemic. This year, GSA is 5-3-1 on the season, and winless in the last five games.

United Futbol Academy (11-2-2) gave Concorde Fire Platinum quite the game earlier this year in a 3-4 loss. UFA couldn’t quite live up to the same battle in the rematch as Concorde Fire walked away with a 6-0 win. Henley Tippins and Carly Wilson were the standouts in the rematch for Concorde.

Real So Cal, LAFC Slammers, and So Cal Blues are all 1-0 to start the season. San Diego Surf is 1-0-1. Surf looked like a national favorite during the event in Phoenix with a 2-1 record including impressive wins over Sting Dallas Black and Mustang SC. Surf is scheduled to get back in action in January.

There is a tight battle at the top of the Texas Conference with Solar and FC Dallas holding nearly identical records. Solar is top of the table with a 12-0-1 record. Solar was perfect through the campaign until the final weekend before the break when Classics Elite held them to a 1-1 draw. The squad will be counting on a balanced attack to lead them in 2021.

FC Dallas is trying to chase down the league-leaders. The attack of Taylor Zdrojewski and Alexis Lee has been nearly unstoppable this season. The two teams are scheduled to meet up in April.