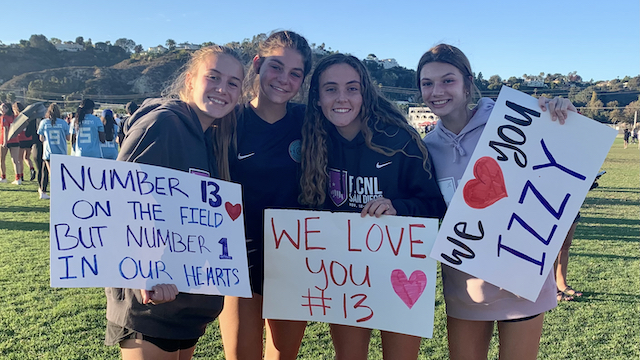 During key ECNL National Events this season, TopDrawerSoccer has asked a few players to provide journals of their experiences from the showcase. KC Athletics' Isabelle De Buyl provided the first entry from the ECNL National Event in San Diego. De Buyl is a standout center back for her club team and was selected to take part in the National Selection game on Friday.

Our hope with these journals is for aspiring players to see what goes into the weekend for players on top club teams - in terms of games, preparation, and recovery. We're fortunate to have these first-hand accounts from some of the top players in the moment. The following section was written by Isabelle De Buyl with only minimally editing by the staff at TopDrawerSoccer.

I woke up bright and early to watch my team play. It was fun cheering them on but I wished I could have played with them. After the game, I came back to the hotel and changed and started to get ready for the ECNL National Selection Game. Typically, before a game I like to listen to music to help pump me up but also to help get me in the zone and start thinking about the game. I like to envision myself making a good tackle or making a good pass. Before the game I was really excited and honored to have the opportunity to represent my club, Kansas City Athletics, and to play against such quality players. I was also kind of nervous because I knew there would likely be a lot of people at the game, and I knew the pressure would be intense. I think one of my strengths is that I’m pretty good at tuning things out and focusing on the game. In some ways, I like crowds because it's exciting when people cheer for you and it’s an amazing feeling to play in front of people who support you. I had a blast playing in the ECNL National Selection Game! It was such a cool feeling to have so many people watching me, especially my teammates! It was an intense game, and we were very well matched. I was amazed at how well we all played together considering we had only met a few hours before the game. I felt confident with the players around me and I did my best to represent my own skills, my passion for the sport, and the values and sportsmanship that my club has taught me.

After the game, my teammates practically tackled me with excitement. I couldn’t believe that they all made signs for me and were so excited for me. That meant the world to me and it was an experience I will always remember.

After pictures and a lot of hugs, we went back to the hotel and ate food at the hotel restaurant. I had a short turnaround before my next game, so I went to bed early and made sure to drink plenty of water!

Today I woke up at 6:00am and got ready to eat breakfast with my team at 6:15 and then afterwards we went for a team walk to stretch our legs. Before this game, I made sure to stretch well and get myself pumped up!!

Unfortunately, we lost 3-2 against FC Dallas, but I think my team and I learned a lot. We battled hard and I saw a lot of players step up and keep us positive. We were losing 2-0 at half and we were able to tie it 2-2. We just couldn't find the back of the net and they got a PK to win it. I was frustrated after the game because I hate losing but I think we grew as a team and learned what we need to work on to improve. After the game we went back to the hotel and took ice baths. Then I showered and changed into some comfy clothes and a group of us went shopping for a little while and got some lunch. We ate at this Ramen Noodle Bowl place, and it was so good, definitely way better than the packaged ones back at home! After that we met some of our other friends at the beach to watch the sunset. It was so pretty and peaceful. The water was so cold we probably could have done our ice baths in the ocean, ha! Overall, it was a really relaxing Saturday. After we watched the sunset, we headed back to the hotel and ate dinner as a team. We had pasta and salad which is one of my favorite pre-game meals! My team and I were all pretty exhausted from the game so most of my team went to sleep right after dinner. Some of us, including me, watched a little Netflix and hung out until our bedtime, which was at 10:00pm. Hanging out with my teammates when we travel is one of my favorite parts of going to showcases and out of town games. I woke up at around 7:00am and packed my bags because we planned to leave straight from my game for the airport. After I was finished packing, I went down and had breakfast with my team at 7:45 am. Then we headed to the fields!

We came out with a win to end the weekend with a score of 2-1 against Da Anza Force. Honestly, it was not my best game, but I dug deep, stayed focused and never gave up. I know I will have a film to review so that I can figure out what I can fix. Sometimes you learn more when you lose or when you have a bad game rather than winning all the time and always playing well. So, although I was disappointed with my performance, I am confident that my coach will help me figure out what areas of my game that I need to improve. I’m proud of my team for winning because we deserved it.

Overall, it was an incredible weekend. I made lots of memories, learned a lot of lessons, and met a lot of new people. ECNL has opened so many opportunities for me and I’m so grateful for that. I love playing on my team and being able to compete with top-level players from around the country.