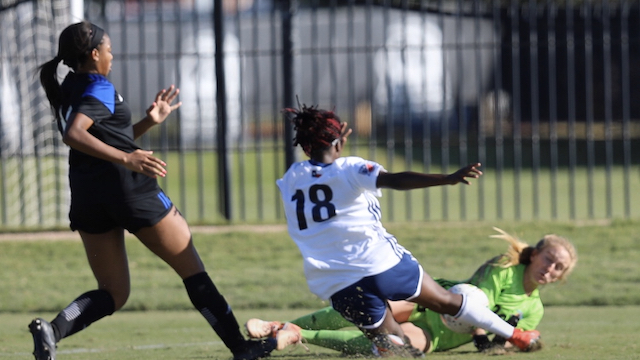 The ECNL season has been full of trials and tribulations. The national league has hosted two national events already with another one quickly upcoming. The teams have battled through unique circumstances and some of the favorites have emerged from the action.

Among the stories of the 2020/2021 club season, Solar stands alone. The dominant North Texas team has been a perennial national championship contender and claimed the hardware a couple of times along the way. The stars have put up gaudy numbers through the first few months of the season including scoring 101 goals in 10 games.

Can Solar be stopped? There are certainly a few teams who think they might have a shot. Based on the first few months of the ECNL season, here are the top teams from every conference.

McLean YSA leads the way in the Mid-Atlantic Conference with an unbeaten 6-0-1 record. Erika Harwood, Tusca Mahmoudpour, Sophie Maltese, and others are among the standouts for McLean in the attack this season. The McLean defense has been extraordinary with four shutouts from seven games.

Korbin Albert was a standout for Eclipse Select U18/19 during the ECNL Event in Arizona in November. The talented attacking midfielder pulls the strings in the center for the Illinois club. Amelia Van Zanten has been a key player for the defense, which has only let inmate than one goal in one game this season.

Minnesota Thunder (1-0), SLSG Navy (7-1), and KC Athletics (5-1-1-) are also in the hunt in the Midwest Conference U18/19 age group this season. Grace Bindbeutel, Kinley Brown, and Rylee Howard have been among the standouts in the attack for SLSG Navy. Taylor Berman, Kayda Kamolz, Joey Foxnow, and Maya Page-Goana have been the standouts in the attack for Kansas City Athletics.

World Class FC’s 1-0 win over SUSA FC is the only game of the season so far in the New England Conference. Most of the other teams in the conference jump into the heart of the season in March.

No teams have played any games yet in the North Atlantic Conference. PDA Blue and the other favorites from the conference begin the campaign in March.

Crossfire United (4-0) is off to a hot start with 22 goals scored and only one goal conceded. The Oregon side has yet to be tested beyond the local rivals, but the initial returns will draw some attention. Cally Togiai has been the star of the Crossfire attack in the past.

The Bay Area Division has not played any conference games yet this season.

Tennessee SC is 3-0 in conference games so far this season. The squad capped 2020 with a 2-0 win over FC Alliance to nab the top spot in the conference standings heading into the break. Katherine McGee recorded the shutout in goal in the victory. Internationals (1-0 and Ohio Elite Soccer Academy (3-1) are also in the hunt in the conference. Internationals looks like the team to watch after going 3-0 during the National Event in South Carolina in December.

Tampa Bay United Rowdies (4-0) have enjoyed a good start to eh the season in conference play, but the Florida club was sent a rude awakening during the event in South Carolina with an 0-3 record at the showcase. Concorde Fire Platinum is also in the hunt in the Southeast Conference after picking up a 8-1-2 record.

It’s been a quiet start to the campaign in the Southwest. So Cal Blues leads the way in the conference, but they have only played one conference game so far. Blues went 2-0-1 at the national event in Phoenix so they still look like a dominant force on the national stage as well.

AZ Arsenal and San Diego Surf are also in the hunt in the Southwest. Both teams are 1-0-1 on the campaign. Surf has only conceded one goal this season including the three games during the National Event in Phoenix.

Solar is the story in the Texas Conference. The team looks unbeatable so far with a 10-0 record, 101 goals scored, and only two goals conceded. Solar is on break from conference games until April.