The second Girls ECNL National Event of 2020 finished over the weekend. Below is a sample of the coverage provided by TopDrawerSoccer in Texas, with a subcription required to read the coverage. Use the promo code 'ECNL20' at checkout to receive 20% off a TDS subscription.

Recap some of the action from around the event by each age group.

The youngest age group sent a small gathering of teams to the National Event. San Juan SC bolstered its standings in the Champions League qualifying standings, they won twice and drew in their three-game swing to Texas.

The Tampa Bay Rowdies, which had swept past opponents to 11 straight wins at the start of the season, lost for the first time in 2019-20. They faced tough opponents falling 2-1 against TSC Hurricane, sandwiching a win over Sting Dallas before losing 3-0 to DKSC. The Florida side is still well-positioned in the standings.

DKSC and AHFC both took advantage of staying in their home state, finishing unbeaten in all three games respectively. The former nabbed two wins and a draw against San Juan SC, a matchup of two of the top clubs in the age group standings. AHFC equaled that record, winning twice and drawing.

Minnesota Thunder Academy, Crossfire Premier, Concorde Fire Platinum, Tennessee SC and Bethesda SC were five of the clubs to come away with three wins from three games in Texas.

TSC Hurricanes' Genesis Helsley had a standout performance in Houston with two goals and an assist in the win over Elite Girls Academy.

Pittsburgh Riverhounds pushed its way up the overall national standings with three wins from three games over the weekend, and now sits at No. 2 behind LAFC Slammers at this age group. All three wins were close, including a wild 3-2 win against Michigan Hawks Black on Sunday.

No. 10 overall Champions League side Classics Elite solidified its standing at the top, picking up two wins and drawing the final game on Monday. Washington Premier managed to hold the Texas club to a 1-1 draw.

Sunrise Prime FC began its 2020 schedule with a trio of victories in Texas. After a 9-0 win on Saturday, they topped FC Wisconsin and Elite Girls Academy to wrap up the trip.

A second Florida side emerged from the trip with three wins. Florida Elite SA played its first games of 2020, and first since November. The side managed to win all three games against FC Portland, CESA and Match Fit Academy.

Both Concorde Fire club teams – Platinum and Premier – didn’t lose a game in Texas, with both teams picking up two wins and a draw. The former remains at No. 1 in the Under-15 Champions League standings.

Isabella Najera, Eclipse Select IL U15, helped her team win two games with two game-winning goals. She scored the lone goal against Tennessee Soccer Club and had one goal against FC Portland ECNL U15.

Table-toppers in this age group, Minnesota Thunder Academy, nabbed three wins from its three games at the National Event.

AHFC backed up its standing as well, rattling off three straight wins not too far from home.

Zoe Ross had a strong weekend for Oklahoma Celtic with a pair of assists while playing all 240 minutes.

Solar SC picked up a huge win on the final day of play at this age group, finishing up the weekend by defeating Concorde Fire Platinum. The Georgia side has scored 101 goals in the season, and Solar made it three wins from three with the win.

Elizabeth Ivey Crain was a standout for Atlanta Fire United with a pair of goals in the game against SLSG-Mo.

World Class FC, Crossfire Premier and Utah Avalanche were also among the clubs to win all three games at the National Event.

Nice touch on the pass and finish for @CrossfirePrmr U16s.

That’s now three straight scores and they lead @FCPRIDESOCCER 3-1 as we approach the final 20 minutes of the match. #ECNLTX pic.twitter.com/V9FSbpWb1F

Among the oldest age group to travel to Texas, Concorde Fire Platinum sits in the No. 5 spot in the Champions League standings, finishing with three wins. That included a narrow 2-1 win against Crossfire Premier on Sunday, and a final day victory over Michigan Hawks Black, featuring the great goal post below.

They’ve maintained control in the 2nd half and this goal makes it 3-0 as time may be running out on @Michigan_Hawks Black. #ECNLTX pic.twitter.com/ffE8mgkEPV

The only other U17 side to enjoy a perfect weekend in the Houston area was Vardar, which wrapped up its trip with a 3-0 win on Monday against AHFC.

Rylee Howard was star for SLSG-MO during the ECNL Event. She had four goals for SLSG-MO in the first two wins. Kinley Brown, Maci Teater, and Hailey Hogenmiller were also key in the attack for SLSG. 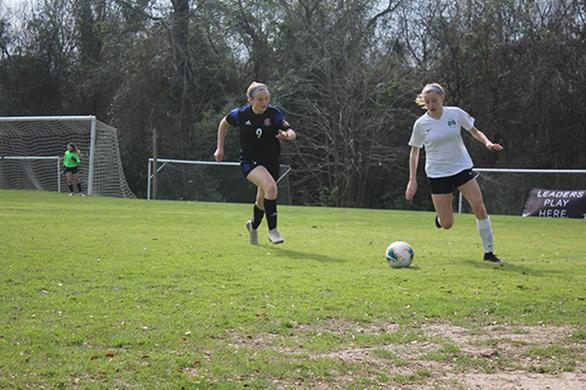