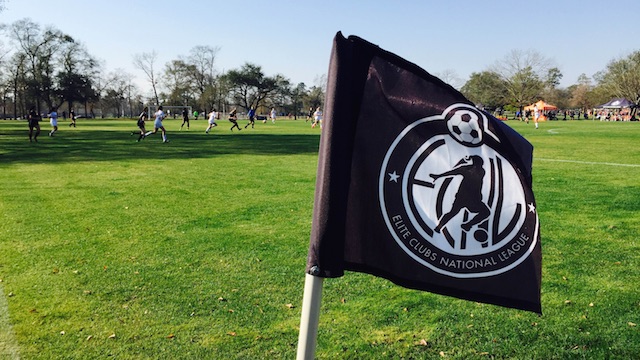 After months of negotiation and rumors, it’s official. The U.S. Soccer-run girls Development Academy is coming.

On Tuesday, U.S. Soccer announced in a release that the federation will officially throw its substantial weight behind a girls answer to the boys DA it founded in 2007. Prophetically, the league will start 10 years after the first, in 2017. Needless to say, the next year in girls development in the U.S. should be a wild ride.

Sensing a gap in the marketplace, U.S. Soccer announced wholesale changes to the model that’s proliferated under the ECNL. They’ll have U15, U17 and U19 age groups and move the rules set away from the college model and toward the international game. Practically, that’ll mean limited substitutions, no re-entry and a more streamlined rest and recovery system.

In a vacuum, the news probably would’ve been met by the quiet optimism that greeted the boys DA in 2007. In that case, there was no national league producing boys players.

Things are quite different this time around.

Of course, the ECNL has existed since 2009 as the primary avenue for the top girls players in the country. While even its administrators admit it has strides to take, it is currently providing upwards of 90 percent of an average U.S. youth national team camp’s players. Like a bull let loose in a shop bristling with delicate items, U.S. Soccer is about to fundamentally change the game.

Over the last several weeks, TopDrawerSoccer.com spoke with a battery of coaches within the ECNL, all of whom will have the freedom to leave the league and choose U.S. Soccer next year. All of them - 100 percent - expressed reservations about moving, and nearly all of them said they’d prefer the ECNL and U.S. Soccer to work together in lieu of establishing competing leagues. Some flat out said they’d refuse to join.

Whether or not the federation has the mandate of the coaches currently ensconced in the country’s best player-producing clubs matters. In the current system, many of these coaches act as the gatekeepers between the club, college and national team level. In order for the federation to keep the system well-oiled, positive relationships with the youth coaches it so desperately needs is paramount.

As expected, U.S. Soccer outlawed play “in any outside competition,” which will of course include the ECNL. But not just the ECNL. Many of the league’s best players moonlight in other competitions, notably in high school and the US Youth Soccer-run ODP. Both instances will provide rockier ground than on the boys side.

By the time U.S. Soccer outlawed outside competition for boys DA players in 2012, the vast majority of the country’s club players had already quit playing high school. The percentage on the girls side is significantly higher, which will open up a larger rift between high school and club that didn’t exist on the same scale on the boys side. Further, plenty of top players use ODP as an ECNL supplement to regain form. After suffering a devastating ligament injury, Catarina Macario, the No. 2 player in the 2017 class, is currently gearing up for the ODP Championships with Cal South.

For the coaches, there’s a sense of being caught in the middle of a tug-of-war that could end with the closure of the ECNL. After six years of growth, most are loathe to see that happen.

“I think it will be bad for the players, and I think it’s bad for the league,” said Hugh Bradford, the director of coaching for ECNL club D’Feeters. “I think working together is a much better option than having two separate leagues competing, because you make it worse for the kids. They have to choose between one or the other based on what they can and can’t do. Are we putting a different pressure on the kids that want to go to the national program, but then you have to go to one league over the other to do that. I think it’s bad for the game.”

According to a report by SoccerWire.com's Charles Boehm, the two sides attempted one final summit two weeks ago to attempt to bridge the divide, but no agreement was reached. In some cases, U.S. Soccer’s requests could only be fulfilled through a U.S. Soccer-led coalition. In others, like training mandates and coaching education requirements, the ECNL reportedly offered to bend. By that point, it was unlikely U.S. Soccer was going to abandon its plans. In the end, it did not.

The most likely course is that the girls side closely mirrors what happened with the boys when the federation split from the rest of the country in 2012. Most of the top players will flock to the resource-rich Development Academy, which will undoubtedly be scouted more heavily by U.S. Soccer and, therefore, be more a more valuable avenue for players looking to break into a youth national team.

What’s not quite so certain is what happens to the ECNL.

The league, which has worked closely with U.S. Soccer over the past six years before communication broke down in the run-up to this new league’s announcement, is suddenly on shaky ground. U.S. Soccer staked its claim to three age groups essentially encompassing the entire swath of ground the ECNL used to own: U14 to U19. The ECNL has not had leagues below the U14 age group, and one wonders now if the league will have to adapt or face extinction.

“I think that’s the danger of it, and I think that’s one thing the federation has to be very careful of,” said Tatu Pecorari, who coaches three of the five ECNL teams for leading club Dallas Sting. “(The ECNL) is going in the right direction. These are wonderful strides. So I’d hate to see the federation kill something that’s going so well. For you to have quality you have to limit the quantity. But you still need to have a home for the others who are not in academy. That’s what the federation is about, is growing the game of soccer at all levels. To me, I like to see both leagues. We need to go together and work with each other.”

For the ECNL, that could mean any number of things, but it will almost certainly require a reorganization. The league released a statement on its official website on Tuesday moments after U.S. Soccer's announcement that pledged the league will continue its mission to "raise the game" in the U.S. Without mentioning the federation's ground-quaking news, the ECNL asserted its success in pushing players on to college, its diversity of coaching and its desire to continue as a league of choice for the nation's top players.

But whether it can stem the growing tide roiled up by the resources at the federation's command, the ECNL faces an uncertain future. In the face of a choice between two leagues, how many clubs will stay put, and how many will jump to the other side of the fence? Will the ECNL become a feeder league for the Development Academy? Or will it dig in its heels and settle in for a protracted battle for the best U14-U18 players in the country?

Indeed, before the 2017 season arrives, plenty of questions demand answers that will shape the course of girls soccer development in the U.S.