Players Development Academy (PDA) joined the party a little late in the ECNL.

The New Jersey club did not start play until December, but the tardiness has not slowed down one of the top clubs in the country from surging to the top of the Northeast Conference in most age groups.

PDA U15 is undefeated through the first nine games of the season. William Bustamante’s squad is 6-0-0 in conference play while only conceding two goals. Goalkeeper Elizabeth Hill has notched four shutouts in those nine games. 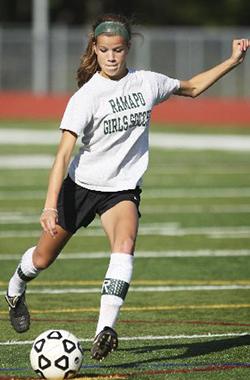 PDA U16 is also undefeated through the opening stages of the season, but Michael O’Neill’s side has been plagued by as many draws as wins. Top 150 2014 graduates Caroline Chagares and Schuyler DeBree are in command of that squad.

The U14, U17, and U18 teams are also among the top teams in their respective age groups, but don’t have the ongoing undefeated streak.

All of the PDA teams (sans the U14s) head to Virginia this weekend for fixtures against McLean Youth Soccer.

Other key matchups in the ECNL:

FC Virginia, the top team in the Midatlantic Conference, hosts FC Bucks and FC Delco over the weekend. The Bucks are in third place in the division thanks to the scoring efforts of Gabrielle Farrell, who has eight goals on the season.

On the opposite coast, San Diego Surf, the top team in the SoCal Conference, hosts Irvine Strikers on Saturday. Camille Bassett, who has nine goals this season, spearheads Surf’s attack.

Bethesda SC takes on Albertson Fury on Sunday in a showdown between National Flight A squads. The Maryland club is currently in the 19th spot in the top flight, while the New York club is in the 21st spot. A win for either side would provide a nice push for postseason hopes.

Rachel Alexander headlines the Bethesda attack. The high school freshman has seven goals and seven assists on the season.

In Washington, Crossfire Premier takes on Slammers FC in a matchup between Flight A teams. Crossfire currently holds the 16th spot in Flight A, but a loss on Sunday to Slammers would drop the Seattle club to 20th.

Sereno Soccer Club hosts Utah Avalanche and Arsenal FC over the weekend. Sereno is in second in Flight B, but a win over Utah would put Paul Taylor’s team level on points with leaders Vardar.

Kyle Escobedo and Tessa Zaccagnio are the top scorers for the Arizona club with 23 goals combined this year.

Dallas Sting and Solar-Chelsea Soccer Club square off on Sunday in one of the few games between Flight A teams over the weekend. Sting is top of the Texas Conference with an 8-2-1 record. Solar is third with a 4-4-3 record.

Sara Summers and Emma Heckendorn have been the catalyst of the Sting attack this season with six goals and eight assists between the pair.

In the Northeast, World Class FC hosts Ohio Premier Eagles on Sunday. World Class FC is sixth in the national standings, while the Eagles are 10th. Brenna Browns leads World Class in scoring with nine goals.

Also on Sunday, Ohio Elite Soccer Academy takes on FC Delco in a matchup between the top two teams in the Midatlantic Conference.

After last weekend, Scorpions SC forward McKenzie Meehan is now averaging an absurd two goals per game through 12 games this season. Next up for the prolific striker is FC Stars of Massachusetts.

In the first meeting between the teams earlier this year, Meehan scored twice and added an assist in a 3-1 victory for Scorpions. Compared to her recent strike rate of eight goals in two games, that seems like a light day.

Ohio Premier Eagles head east to take on FC Delco and World Class FC over the weekend. The Eagles staunch defense has recorded nine shutouts this season, which has helped the team to a seven-game undefeated run.

Dallas Sting, the eighth place team in Flight A, hosts Solar-Chelsea SC on Sunday in a Texas Conference matchup. Sting won the first meeting in November 2-0 behind goals from Lauren Selaiden and Madeleine Lundberg. Since then, Solar has won seven of its last eight games.

Arsenal FC takes the trip out to Arizona this weekend for games against SC Del Sol and Sereno Soccer Club. Arsenal is currently fourth in the National Flight A Standings, and a win over SC Del Sol on Saturday would push the California club over idle Mustang SC.

In order to accomplish that, Arsenal will need to stop del Sol striker Cali Farquharson, who has 21 goals and 10 assists in 19 games this year.