Over Memorial Day Weekend, more than 200 of the top girls club soccer teams will head to New Jersey for the last ECNL Showcase of the regular season.

Players Development Academy plays host to this weekend’s games, as thoughts of playoffs linger over the proceedings with only a couple of weeks left in the regular season.

Only the U15, U16, and U17 age groups are in action at the PDA Showcase, so here is a look at some of the best games from the event.

TopDrawerSoccer.com will be on hand on the event, so make sure to tune in to the website throughout the weekend and next week for coverage from New Jersey.

GSA has been on break since March, so rust could be an issue for the squad that scored 75 goals in 16 conference games. 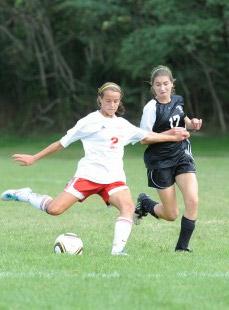 The two other undefeated teams in Flight A, PDA and Ohio Elite Soccer Academy, face off on Monday. Ohio Elite is currently sixth in the Flight A standings, while PDA is tenth and riding a 10-game winning streak.

Midfielder Taylor Racioppi, who is #5 in our 2015 player rankings, leads the New Jersey team. Ohio Elite has a couple of very talented players in its own right including #10 in the 2015 rankings Jill Vetere.

In Flight B, Penn Fusion is heading into the weekend with the hope of jumping into the top four. Fusion, currently fifth in the standings, is in the midst of a five-game undefeated run.

Behind the torrid goal-scoring twosome of Bryce Watts and Deirdre Bradley, Fusion is top of the Midatlantic Conference and looking to guarantee a promotion to Flight A for next season with three wins this weekend.

Slammers FC look to hold onto the top spot in Flight A with games against Carmel United, Bethesda, and Dallas Texans over the weekend. MacKenzie Cerda has been at the front of the Slammers’ attack all year. The sophomore is up to 14 goals on the year in 23 games.

PDA’s undefeated season will be put on the line with three games against playoff-bound teams. First, the New Jersey team will take on San Diego Surf on Saturday. Surf is currently eighth in the Flight A standings. On Sunday, it is So Cal Blues against PDA. The Blues are currently third in the national standings, but winless in its last four games.

On Memorial Day, PDA takes on Jorian Baucom and Sereno Soccer Club. Baucom has 16 goals in 12 games this season including four in her last three games.

The action starts early for Flight B with leaders FC Delco taking on third place Concorde Fire on Saturday. A win for the Fire is not enough to overtake FC Delco (or second place Real So Cal), but it would make the rest of the weekend pretty interesting amongst the top three.

The uber-talented Heat FC needs a nine-point weekend in New Jersey if it wants to keep postseason dreams alive. The Las Vegas team takes on Birmingham United, De Anza Force, and Irvine Strikers over the weekend.

The host got no favors from the schedulers in the U17 age group. PDA, which is currently 19th in Flight A, takes on the number one and number four to start the weekend.

On Saturday, PDA faces Dallas Texans, the fourth place team. The next day, it is PDA against Eclipse Select Soccer Club, who has not played since December.

PDA will need some points from the two games to jump into the playoff picture.

FC Virginia is also looking to pick up some points this weekend. Virginia is currently 16th in the Flight A Standings with only these three games over the weekend remaining on the schedule.

FC Virginia starts the weekend with a clash against So Cal Blues, which is fighting to stay out of the relegation zone. Then the Virginia club faces Slammers FC, who is sixth in the standings.

The Midatlantic Conference club wraps up the weekend with Carmel United. Virginia will be wary of Carmel’s lethal twosome of Victoria Doss and Emma Dwenger.

There is a lot on the line for FC Stars of Massachusetts this weekend. The Northeast club is currently in a spot to make the playoffs for promotion, but could move into one of the automatic spots with a positive display in New Jersey.