DEL MAR, California – The San Diego ECNL National Event kicked off on Friday at the San Diego Polo Fields with a plethora of teams getting the action off to a flying start. 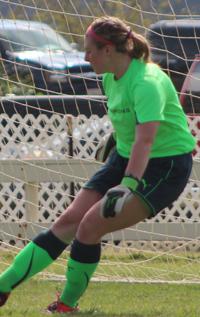 Colorado Rush U18, one of the top teams in the oldest age group, showed its quality in a 3-0 win over a gritty Scorpions SC (Massachusetts) side. Rush used a pair of goals from ECNL’s top scorer Danica Evans to start the completion on a positive note.

In a battle of Northern California against Southern California, Mustang SC U15 fought to a scoreless draw against local team San Diego Surf. It was only the second time this season Surf has dropped points in ECNL play.

Evans’ opener came with 15 minutes left in the first half. The 17-year-old picked up the ball a few yards off the center spot. Her first step put the defense on its heels, and she continued to attack the retreating defenders. With a sublime piece of dribbling, Evans cut past the two Scorpions center backs and then buried her shot around the keeper.

“We are definitely a possession based team,” Rush defender Havana McElvaine told TopDrawerSoccer.com. “We have had trouble in the past scoring goals, and Danica’s amazing individual effort started the spark for all of us. After she scored that goal, we all started clicking.”

Despite the dominance in possession following the goal, Rush only held a one-goal lead at the break. Shortly after intermission, Evans doubled the lead with a tremendous strike from range that the Scorpions goalkeeper could not stop.

Former U.S. U17 Women’s National Team defender Gabbi Miranda capped the scoring for Rush with another quality rip from distance that blew past the keeper and into the net.

Miranda is one of three former U17 WNT standouts on this Rush side; Elizabeth Raben and Morgan Stanton are the others. Darian Jenkins is also on the roster for Rush, but she is not with the team in San Diego.

Rush takes on Arsenal on Saturday. Scorpions will look to bounce back against So Cal Blues in their second game.

The San Diego Surf club definitely enjoyed playing at home on Friday. The club went 4-0-1 across the five age groups and did not give up a goal.

Northern California club Mustang SC was the only one to scrape any points off the giants of Southern California. Thanks to some stellar saves from goalkeepers Kaylyn Evans and Kaylie Collins, who split the game in net.

Evans was the first to don the gloves, and she came up with a couple of point blank saves in the opening 40 minutes to keep the sheet clean.

“We have two very good goalkeepers,” Mustang head coach Joe Owen told TopDrawerSoccer.com about subbing out his keeper after a hot start. “They both contributed.”

In front of the keeper, center backs Colby Parker and Grace Stewardson had superb showings for the Northern California club. Owen called it the “best game of the season” for the pair. Against the dynamic Surf attack, Parker and Stewardson stood tall and made smart decisions in possession.

It was not a one-way street though. The girls in red had a couple of quality looks to steal all of the points from the fixture.

Midfielder Morgan McGarry had the two best chances early in the second half. McGarry tried her luck from distance with a right-foot bomb, but it smashed off the post and was cleared by the Surf defense.

“She is the kind of player that can change the game for us just like that,” Owen said about McGarry. “She probably took that first 20 minutes of the second half and put it on her shoulders to try to win the game.”

It was not to be though, and the teams settled for a scoreless draw. Surf face Crossfire Premier in its second game from the event, while Mustang take on Ohio Premier Eagles.