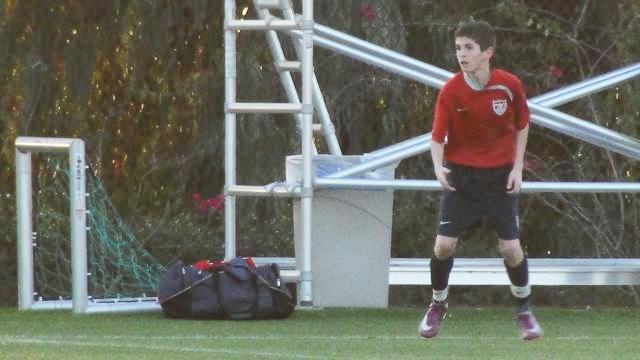 CARSON, CALIFORNIA – The message from the coaching staff before the game was simple: have fun. And that is exactly what the U14 Boys National Team did on Wednesday night at the Home Depot Center.

In the first friendly of the evening, the national team claimed a 3-2 victory over Los Angeles Galaxy Academy U14/’97.

Winger Christian Pulisic and forward Joe Gallardo paced the attack with a goal and an assist each in the win.

Pulisic’s dashing runs at the defense were one of the highlights of the night for the national team, as the five-foot tall winger continuously challenged bigger and stronger defenders with his elusive pace and silky skills.

Kyle Gurrieri
The left-footed attacker contributed immediately with an assist in the third minute to Gallardo for the first goal of the game.

“The ball came out wide to me, I cut one guy and played a nice through ball into Joe Gallardo up top,” Pulisic told TopDrawerSoccer.com after the game. “He had a nice finish on it.”

In the 31st minute, Gallardo returned the favor with an assist to Pulisic to put the national team up 2-0 in the first half.

“Joe made a very nice move and played a great ball across,” Pulisic said. “I was in the right spot at the right time. I slid in and put it in there. It was a good finish.”

Galaxy answered minutes before half when Cesar Faris cut past a defender and ripped a shot that netminder Abraham Romero could not stop.

The MLS youth academy carried that momentum through the halftime break and nearly equalized seconds into the second half.

Substitute Umayr Syed broke through the defense on the opening play after the kickoff, but Romero stopped him twice from close range to maintain the one goal advantage for the national team.

Ten minutes later, Gallardo nearly had his second of the game when he beat his mark with an exquisite first touch. The striker from San Diego rounded the keeper, but a retreating defender blocked his shot from crossing the line.

Syed atoned for the early miss in the second half in the 60th minute when he hit a shot from 20 yards out that flew past Romero and into the net for the tying goal.

But the national team ultimately prevailed thanks to substitute Elijah Rice, who found the back of the net after 15 minutes on the field.

“It came from a really good buildup from the back,” Rice told TopDrawerSoccer.com after the game. “My good friend Luca [De la Torre] set it up, and I put it in.”

De la Torre, who was excellent throughout the contest, withstood a few challenges before running through the Galaxy defense and cutting the ball across to the waiting Rice.

Rice calmly put the ball into the net and thanked his pal for the classy helper.

The national team should have added to the lead seven minutes later when substitute midfielder Alejandro Zendejas stole the ball in the center circle and immediately raced past the defenders.

Zendejas unselfishly laid off a pass to Joshua Perez on his right, but the Chivas USA Academy product suffered from some tired legs and could not beat the keeper.

Other than that mishap though, Perez was solid as a two-way midfielder while playing for his uncle Hugo Perez.

“I treat him like everyone,” U14 national team head coach Hugo Perez told TopDrawerSoccer.com about coaching his nephew. “This is a good step for him being here, and now going back [to ACF Fiorentina] will be a good step too.”

Hugo Perez said Joshua will be returning to Fiorentina in two weeks for another trial and added that “it is getting serious now” about the Italian club signing the young American to a contract. Joshua Perez spent extended periods of 2011 with the Serie A club.

The U14 national team saw the game out for 3-2 win, but the coach was not too worried about the score.

“I was very happy with the way we played,” Perez said. “There were about six or seven players who stood out [from the first game] and the rest weren’t bad either. The first group is very strong.”

The players were also pleased with how the team performed in the opening match of the night.

“I think the team played really well,” Pulisic said. “We played how the coach wants us to play – simple, quick – and we came out with the win.”

or send him an email.
Related: Players To Watch,