The IMG Academy Top 150 Rankings for boys in the 2013 graduating class is out today. Some of the players have already signed professional contracts, most will be signing National Letters of Intent in just a couple of weeks, but almost all are deeply in the midst of their last season in the Development Academy. 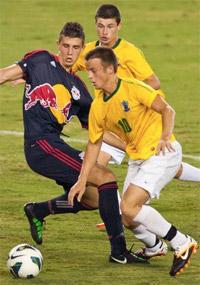 There have been some standout performances in the Academy since our last update, most notably by New York Red Bulls defender Matthew Miazga, who debuts at #58 on our list. Miazga had a busy fall, getting called up to the U.S. U18 Men’s National Team camp in November, followed by a performance on the Development Academy Select Team just days later.

Also new to the list are DC United striker Nigel Robinson at #89, Houston Dynamo forward Carlos Ibarra at #97, and Santa Barbara SC defender/midfielder Joshua Yaro at #126. Robinson, a verbal commitment to Maryland, received multiple recommendations to be added to the list. Ibarra has spent time with the Houston Dynamo Reserves and was chosen for the Development Academy Select Team at the Academy Showcase in Sarasota last month. And Yaro is a product of Ghana’s Right to Dream Academy, and will play at Georgetown in the fall.

Three players previously on our list who have had outstanding senior seasons thus far are Seattle Sounder striker Jordan Morris, Baltimore Bays midfielder Jacori Hayes, and South Carolina United Battery forward James Carlin. Morris climbs 40 spots to #86, having scored 13 goals at the midway point of the season, and is committed to play for Stanford in the fall. Hayes, a Wake Forest commitment, climbs to #100 and is the midfield leader for the Bays this season, who are currently in 2nd place in the Atlantic Division. Carlin, a South Carolina commitment, is at #111 and has scored 9 goals in 9 games after recovering from an injury earlier in the season.