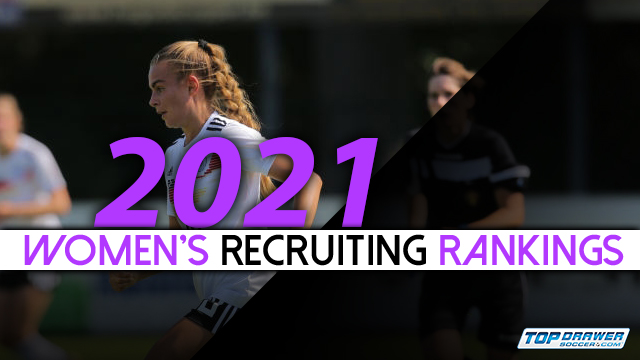 The final Division I recruiting class rankings are out this week as the women’s DI season kicks off on August 19.

After sifting through the newcomers, leaning heavily on players ranked in the Club Soccer Player Rankings, presented by IMG Academy, below is the final Top 50 DI classes for the 2021 season.

The volume of what should be solid players helps maintain Cal’s spot at the top of the rankings. The proof will be when they reach campus, of course. Ayo Oke has the makings of a very good outside back at the DI level.

Sentnor was ranked as the No. 1 recruit in the most recent update, giving UNC five players in the Top 50 and moving them into No. 2 spot. Freshman Ruby Grant enrolled this spring and has made her debut after originally being part of the 2020 class, deferring to the spring of 2021 due to the pandemic.

Texas has a great class. Will it translate on the field for head coach Angela Kelly? The team has never won a Big 12 regular season or tournament title since she took over ahead of the 2012 season. Between 2020 and 2021 recruiting classes, UT may have their best group of her time in Austin. On paper, the Longhorns look like contenders.

USC confirmed several high-level additions, as they will need to replace a very good senior class. The volume of quality is extremely impressive and could arguably be ahead of Texas. Talley’s late addition is a big bonus.

The Cardinal have confirmed a six-player signing class for 2021. Retooling the attack is a priority as the Cardinal continue to adjust to life after Catarina Macario, which didn’t certainly was a big reason for spring struggles. Katelyn Duong’s transfer in the spring adds a solid option in central midfield.