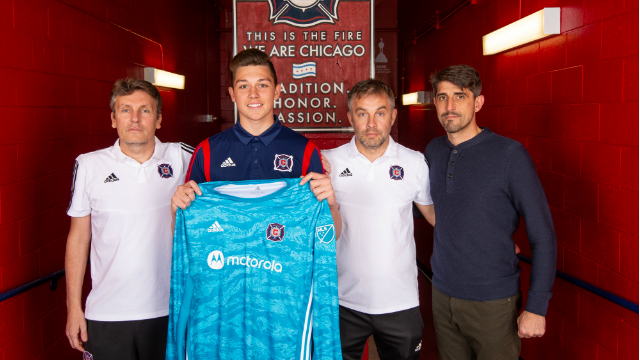 The Chicago Fire have now signed the youngest Homegrown player in league history.

“Obviously, we believe that Gabriel has high potential,” Chicago Fire Soccer Club President and General Manager Nelson Rodrίguez said in a press release. “While we would always prefer not to sign players at such a young age, a convergence of factors made his signing at this particular moment the right course of action for everyone. We will be patient and deliberate in advancing Gabriel’s development while ensuring he retains some normalcy as a teenager.”

Slonina, a 6-foot-4 goalkeeper, has been part of the Chicago Academy over the past three seasons. During the 2018-19 campaign, he's made 12 appearances for the Under-16/17 team. The No. 12 ranked player in the 2022 IMG Academy Top 150, he's the second player in the class to officially turn pro. Over the past year, he's received a few call-ups to the U.S. U15 BNT, including the most recent camp in California held at the end of January.

“The pathway to our first team is clear. We will continue to sign those players who exhibit the right mentality and talent,” Chicago Fire Academy Technical Director Cedric Cattenoy said in a release. “We have a development plan in place for Gabriel and we look forward to continuing to work with him.”